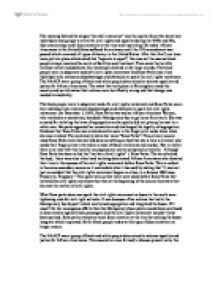 Rosa parks overcame racial discrimination at the time by making the buses integrate which improved life for black people today as this type of discrimination no longer occurs. The NAACP was a group of black and white people determined to achieve equality and justice for African Americans. This association was formed to discuss present evils, the voicing of protests and the renewal of the struggle for civil and political liberty. The NAACP issued a call in 1909 which was an emotional appeal to reform society by discussing African American segregation and disenfranchisement at a national conference. The main activities that the NAACP carried out included legal aid, mass meetings to discuss injustices suffered, investigations into lynching's and publicise the injustices suffered by African Americans. The NAACP would publish issues of a magazine called the crisis which would publicise injustices suffered by African Americans. Evidence that the crisis publicised injustices was in the primary source of the issue in May 1914 which features a paragraph of a person being lynched. "Some yelled hang him, some to burn him alive", "then a yell went up from the crowd to shoot him and in an instant there were several hundred shots and the creature fell in his tracks". ...read more.

Newspapers published these photographs all over the world. After this President Kennedy sent troops to restore order in Birmingham. People marched again a few days later and the police chief ordered police to again turn fire hoses but they refused. This shows us how significant the event was as it made those racists feel bad and shameful in what they done that they will no longer do this. This event was very important as it marked the success of the entire civil rights campaign as after this President Kennedy called on congress to pass more civil rights laws and then the civil rights bill became law when LBJ signed it on 4th of July 1964. This event shows us how the e hall overcome slogan was the capital force in driving people to strive for equal rights. That people constantly held this believe and together with their moral courage they mad the civil rights law happen. In conclusion the slogan was truly the capital force the drove individuals like Rosa Parks, groups like the NAACP and people who took part in events like that in Birmingham to overcome racial discrimination and segregation, thus achieving civil rights and equality. These people and groups helped determine the success of the civil rights movement through their courage and determination. ...read more.