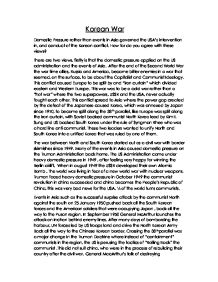 Korean War Domestic Pressure rather than events in Asia governed the USA's intervention in, and conduct of the Korean conflict. How far do you agree with these views? There are two views, firstly is that the domestic pressure applied on the US administration and the events of Asia. After the end of the Second World War the war time allies, Russia and America, became bitter enemies in a war that seemed, on the surface, to be about the Capitalist and Communist Ideology. This conflict caused Europe to be split by and "iron curtain" which divided eastern and Western Europe. This war was to be a cold war rather than a "hot war" where the two superpowers, USSR and the USA, never actually fought each other. This conflict spread to Asia where the power gap created by the defeat of the Japanese caused Korea, which was annexed by Japan since 1910, to become split along the 38th parallel, like Europe was split along the iron curtain, with Soviet backed communist North Korea lead by Kim IL Sung and US backed South Korea under the rule of Syngman Rhee who was a hard line anti communist. ...read more.

General MacArthur's talk of destroying communism in the region caused the Chinese major concerns that the US would invade their home land. In a meeting between General MacArthur and President Harry Truman, MacArthur re-assured Truman that China would not enter the war if US troops moved towards the Yalu river, which marked the border between China and Korea, Truman gives him the green light to continue. As UN troops move towards the Yalu river they are attacked by half a million Chinese Volunteers and 150 , 000 North Korean troops pushed the UN forces all the way back past the 38th parallel and recaptured the Southern Korean capital of Seoul. Macarthur's calls to "nuke" Beijing disturbed the whole world when Truman did not deny the possibility of using nuclear weapons on the Chinese. Truman finally decided that using nuclear weapons on china would lead a nuclear world war, due the special relationships between the USSR and china. By the summer of 1951 there was a stalemate along the 38th parallel with us air superiority, 2 million civilians were killed. ...read more.

By December 1951 all Americans and UN forces were becoming weary of the war and the US people wanted the war to finish as it was straining on the economy to fight a war that the people were not interested in, having failed to stop the war Truman lost the next Presidential elections and Eisenhower comes to power as US President with the slogan "I shall go to Korea". Unlike World War 2 the US public became weary of hearing about the Korean War that Newspaper a, radios and televisions stopped reporting about the events in Korea. Eisenhower was elected to finish the war. In March 1953 Stalin dies and his successors did not think North Korea could win the stalemate so they decided to join the negotiation table. In June 1953 a Ceasefire and Armistice was signed with the exchange of Prisoners Of war. Till this day North and South Korea are still divided along the 38th Parallel. In conclusion, Events in Asia led to domestic pressure in the USA. However the McCarthy Witch hunts applied pressure on Truman to take a hard stance towards communism and change his Doctrine to that of Roll Back instead of Containment. ...read more.