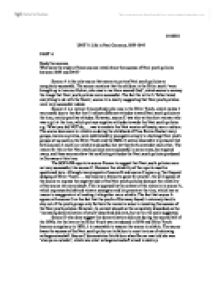 The introduction of marriage loans, which were given as a gift to families if they had over four children, did increase not only the birth rate in Germany but also the number of marriages taking place. Child allowance and child subsidies also helped raise the birth rate, which these policies were obviously aimed to achieve. In this respect they were very successful, but the Nazi ideology was actually being violated, as many women were becoming pregnant out of marriage, which was actually encouraged by the Nazis to increase the population. In this respect the Nazi policies were not successful, and the consequences opposed their ideology. Another example of this involved the Nazi views on women at work. Many men were angry during the depression over the large female employment force, and Nazi ideology also opposed this, but the percentage of women in employment stayed the same during the Nazi period. This was due to the fact women under 25 were forced into labour during the war, which is again an example of the Nazi regime going against their ideology, making their policies again unsuccessful. ...read more.

This transformation was not the Nazi aim of the policies introduced. One major Nazi policy was to support big business and help it grow to help rearmanenent. This policy was a vital blow in the Nazi bid to produced a volksgemeinschaft, as while the big businesses got bigger, the upper class grew and condemned the small traders and other middle class people to the working class. The Nazi policy aimed to help rearm the country destroyed any previous policies aimed at creating a volksgemeinschaft as the gap between working class and upper class actually grew. This consequence meant that Nazi attempts to transform German society into a volksgemeinschaft would always be undermined as they gave the working class no chance of integrating with the upper classes. Overall, Nazi policies that were ideologically driven rarely met their aims due to other contradictory policies introduced to help military expansion. Nazi ideology on volksgemeinschaft and the perfect family was undermined by the need to make Germany a great nation again. The only respect in which the Nazis did transform the society is the role of women havimg babies, but this idea was an existing idea in Germany anyway but was just exaggerated by the Nazis. All other policies driven by ideology failed to meet their aims mainly due to other contradictory policies introduced. ...read more.