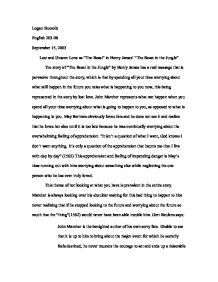 Lost and Unseen Love as 'The Beast' in Henry James'

Logan Buccolo English 203-08 September 15, 2003 Lost and Unseen Love as "The Beast" in Henry James' "The Beast in the Jungle" The story of "The Beast in the Jungle" by Henry James has a real message that is pervasive throughout the story, which is that by spending all your time worrying about what will happen in the future you miss what is happening to you now, this being represented in the story by lost love. John Marcher represents what can happen when you spend all your time worrying about what is going to happen to you, as opposed to what is happening to you. May Bertram obviously loves him and he does not see it and realize that he loves her also until it is too late because he was continually worrying about the overwhelming feeling of apprehension. "It isn't a question of what I want, God knows I don't want anything. ...read more.

Only after May's death does Marcher come to realize her importance to him and see that she loved him. Too late, he understands that he should have acted by returning the passion she felt for him. Thus summarized, the story is a romantic tale with a palatable moral. If only the hero had been less self-preoccupied, he would have responded to the love of this warm and selfless woman. Or, with a slightly different emphasis, if only the hero had not dreamed in such lofty terms of a strikingly rare destiny, he would have embraced the worthwhile opportunities offered by common reality. (Beulen, 17) This is also prevalent in James's other works, this idea that people seek to be "independent and self-directed" (Stuart, 210) but cannot be is common in many of James's other works. "although moral absolutes are notably absent in James, there remains a more limited morality, one specific to a community and to time and place. ...read more.

In a world governed by social conventions, James found true contact between individuals often impossible, in spite of his lifelong efforts to cultivate sympathy, to share with his fellow mortals what he called the "inward ache"(Boudreau, 69) This insight into James parallels what happened to John Marcher in "The Beast in the Jungle" in that Marcher could not achieve the level of intimacy with May that he wanted to achieve just as James could not in his own life with those around him. Henry James presents a clear moral statement in his short story "The Beast in the Jungle" which is that you must not be too self-absorbed and too focused on the future in life otherwise you will miss the wonderful things that life has to offer. Kristin Boudreau said that James had this problem in life and that may be one of the reasons why he chose to write about it. Marcher loved May but could not see it until the end when the beast of his own self-absorption devoured him as a result of his missed chance of real love. ...read more.