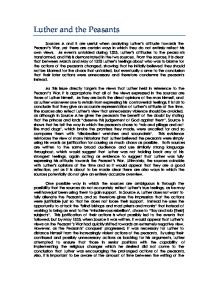 Luther and the Peasants

Luther and the Peasants Sources A and B are useful when analysing Luther's attitude towards the Peasant's War, yet there are certain ways in which they do not entirely reflect his own views. As events unfolded during 1525, Luther's attitudes to the peasants transformed, and this is demonstrated in the two sources. From the sources, it is clear that between March and May of 1525 Luther's feelings about who was to blame for the actions of the peasants changed, showing that he initially believed they should not be blamed for the chaos that unfolded, but eventually came to the conclusion that their later actions were unnecessary and therefore condemns the peasants instead. As this issue directly targets the views that Luther held in reference to the Peasant's War, it is appropriate that all of the views expressed in the sources are those of Luther himself. As they are both the direct opinions of the man himself, and as Luther was never one to refrain from expressing his controversial feelings, it is fair to conclude that they give an accurate representation of Luther's attitude at the time. ...read more.

Ultimately, the sources coincide with Luther's opinions at the time and so it would appear that they are a good reflection, yet as it is about to be made clear there are also ways in which the sources potentially do not give an entirely accurate overview. One possible way in which the sources are ambiguous is through the possibility that the sources do not accurately reflect Luther's true feelings, as he may well have just been using them to gain support. In Source A, Luther does not want to fully alienate the Peasants, and so therefore gives the impression that the actions were justifiable just so that he does not loose their support. Instead he uses the opportunity to attack the "blind bishops and mad priests and monks" that instead of working to bring an end to the "mischievous rebellion", chose to "flay and rob [their] subjects". ...read more.

This means that they can not give an entirely thorough analysis of Luther's overall feelings towards the Peasant's War, as they do not take in to account the proceedings that took place throughout and after the period of the Peasant's War. On balance, it would appear that both Sources A and B generally reflect the opinions of Luther towards the Peasant's War, but there is also a possibility that the reason behind their issuing may have been to gain support from the different groups which he needed to gain the support of, and it is also necessary to be aware that there are several other factors that could mean that sources are not entirely reliable. For these reasons, it is possible to conclude that although they provide a good degree of evidence when analysing Luther's views towards the Peasant's War, it is always important to consider that they have also been influenced by the requirement for Luther to gain the support of the Peasants and yet not to be seen as responsible for the increasingly violent methods which were being employed by the peasants. ...read more.