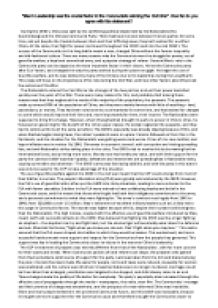 Maos Leadership was the crucial factor in the Communists winning the 1945 Civil War. How far do you agree with this statement?

﻿?Mao?s Leadership was the crucial factor in the Communists winning the Civil War?. How far do you agree with this statement? During the 1930?s, China was split by the conflicting political ideals held by the Nationalists (the Guomindang) and the Chinese Communist Party. There had been tension between the two parties for some time, and yet despite the trouble between them and their differing views, they both wished for a unified China. All the same, their fight for power continued throughout the 1930?s and into the mid 1940?s. The success of the Communists in this long battle meant a new, changed China without the former inequality and old-fashioned culture. There are many reasons why the Communists won the struggle for power; use of guerrilla warfare, a loyal and committed army, and a popular strategy of reform. General Mao?s role in the Communist party can be argued as the most important factor in their victory. He led the Communist party after Sun Yatsen, and changed the way the party worked during the power struggle. He began the use of Guerrilla warfare, and he was idolised by many of the Chinese due to his leadership during the Long March. This essay will focus on the importance of his role during the Civil War, and how other factors also influenced the outcome of the War. The Nationalists entered the Civil War as the stronger of the two parties, and yet their power dwindled quickly over the years of the War. ...read more.

The army?s numbers rose hugely from 1945 to 1948; from 320,000 to over 1.5 million. Mao?s enlistment of excellent military leaders such as Lin Bao led to this surge in Communist forces. The morale was higher because of this, despite their numbers still being less than the Nationalists. The high morale, coupled with the effective use of guerrilla warfare introduced by Mao, meant swift and successful attacks on the GMD. Mao believed that fighting the GMD was like a tiger fighting an elephant ? the elephant can try and fight back, but the elusive tiger will eventually wear down the defences and win. Mao told his forces; ?fight when you know you can win. Don?t fight when you may lose.? This motto ensured that the PLA never strayed into battles in which they would be beaten. This worked well, and more successful battles meant more support and respect for the Communists from the people they governed. This support was key in leading the Communists closer to victory in the war over China?s leadership. The CCP?s treatment of peasants was entirely different from that of the Nationalists?, with far more concern for their wants and needs. When Communist policies of land reform took shape, the peasants who gained from them provided a solid source of support for the party. Land was taken from the rich and shared among the poor, interest-free loans made life easier for people, rents and taxes were reduced, inequality for women was eradicated, and the culture was reformed. ...read more.

Mao himself took many of his policies from the leaders of the Russian Revolution, particularly Lenin. Although the support from the USSR was appreciated, the CCP still stood very much on its own two feet and managed to widely sustain itself. The GMD, however, became reliant on the funding and guidance of the USA. This resulted in the Nationalists finding it very difficult to maintain control without them, making their isolated situation easy for the CCP to take over. Overall, I think that there were many important factors which led to the Communists winning the Civil War. Their commitment to the peasants, the mistakes made by the Nationalists, the effective battle strategies of the PLA, and Mao?s logical governing ? these were all key in the Communists winning the Civil War. The majority of these policies and ideas were initiated by Mao, and his leadership was crucial in the victory. Without Mao, guerrilla warfare, the PLA?s policies, and perhaps even the CCP itself, would not have made it to power. Mao?s part in the Long March made certain that the CCP made it to the countryside and safety. His influence on the decisions which were made by the Communists ensured that the CCP stayed true to their cause. He made sure that they emerged from the war as the strongest of the two parties. I think that his role in the Civil War was the CCP?s greatest asset, and that his participation made sure that the Communists won and not the Nationalists. ...read more.