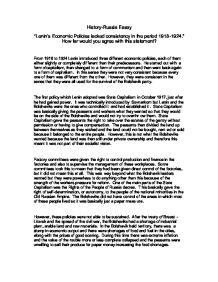 Lenins Economic Policies lacked consistency in the period 1918-1924. How far would you agree with this statement?

History-Russia Essay "Lenin's Economic Policies lacked consistency in the period 1918-1924." How far would you agree with this statement? From 1918 to 1924 Lenin introduced three different economic policies, each of them either slightly or completely different than their predecessors. He started out with a form ofcapitalism, then changed to a form of communism and then went back again to a form of capitalism. In this sense they were not very consistent because every one of them was different from the other. However, they were consistent in the sense that they were all used for the survival of the Bolshevik party. The first policy which Lenin adopted was State Capitalism in October 1917, just after he had gained power. It was technically introduced by Sovnarkom but Lenin and the Bolsheviks were the ones who controlled it and had established it. State Capitalism was basically giving the peasants and workers what they wanted so that they would be on the side of the Bolsheviks and would not try to overthrow them. State Capitalism gave the peasants the right to take over the estates of the gentry without permission or having to give compensation. The peasants then divided the land up between themselves as they wished and the land could not be bought, rented or sold because it belonged to the entire people. ...read more.

Each individual industry was brought under the control of different departments within the Vesenkha. These individual departments were called glavki. The Vesenkha was attached to Sovnarkom. Discipline was reasserted into the factories and the nationalisation of the industries meant that the one man management replaced the workers councils. In addition the Bolsheviks introduced internal passports in an attempt to halt the flood of industrial workers to the countryside. Trotsky wanted to tighten control over industrial workers even more by creating a labour army which was to work under the control of military discipline, however, Lenin overruled him. From 1918 onwards, the policy of grain requisitioning was introduced, which meant that 'Food Brigades' were sent out from the towns to extract peasantry to feed the people of the towns and cities. On occasions and when necessary, the Red Army and the Cheka were used to extract this grain. In practice the grain requisitioning was basically the theft of the grain. This annoyed the peasants because it often meant that they had barely enough grain for themselves and their families. Rationing was introduced and it really brought to light the Bolsheviks priorities and values. The biggest rations went to the Red Army soldiers and the workers in the heavy industry, and then came the civil servants and the workers in the light industry. ...read more.

However, the industries that remained under the control of the state after 1921-22 were not complete owned by the government. They were expected to trade at a profit, and if they got into difficulties then they would not have been bailed out by the government. Industries and factories were consequently forced to increase efficiency and this meant a rise in unemployment as they tried to get rid of extra workers that were not really needed. However, the Bolsheviks were once again not happy with this because it was more like capitalism than it was like communism. The fact that small business ownership had been legalised meant that there was an uptake in get-rich-quick traders, or 'nepmen', which opened casinos, bars and nightclubs in the major cities. This policy was once again a chance at survival that seemed to not to be very successful and ended up being dubbed with such names as the 'Peasant Brest-Litovsk.' All of Lenin's economic policies were aimed at the survival of the Bolshevik party. The state capitalism and the New Economic policy was used to give the people what they wanted so as to keep them happy and the War Communism took what was needed to keep the people of the cities and towns happy. Therefore they had consistency in that way. However, because each one was different, they were not very consistent and this led to the people being annoyed that everything was being constantly changed. ?? ?? ?? ?? ...read more.