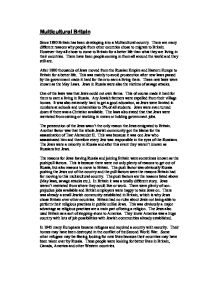 Multicultural Britain Since 1880 Britain has been developing into a Multicultural country. There are many different reasons why people from other countries chose to migrate to Britain. However they all chose to come to Britain for a better life than what they are living in their countries. There have been people coming in from all around the world and they still are. After 1880 thousands of Jews moved from the Russian Empire and Eastern Europe to Britain for a better life. This was mainly to avoid prosecution after new laws passed by the government made it hard for them to earn a living there. These new laws were known as the May Laws. Jews in Russia were also the victims of savage attacks. One of the laws was that Jews could not own farms. This of course made it hard for them to earn a living in Russia. Any Jewish farmers were expelled from their village homes. It was also extremely hard to get a good education, as Jews were limited in numbers at schools and universities to 5% of all students. ...read more.

They knew America was a huge country with lots of job possibilities with Jewish communities already established. In 1945 many Europeans became refugees and required a country with security. Their homes may have been destroyed in the conflict of the Second World War. Some other refugees may be fleeing looking for new lives because their countries may have been taken over by Russia. These people were looking for better lives in Britain, Canada, America and other Western countries. Of course Britain had a secure country and refugees were welcomed into Britain by the British government. This was for a few reasons. Firstly there was a labour shortage because the war had killed men and women either on the frontline or at home in bomb raids. The soldiers still alive were still in the army before being let home. It was several years before they were let out. There were plenty of jobs available apart from in the government. People were asked to come to Britain if they wanted jobs. The war had of course wrecked houses and there was a lot of work that needed doing. ...read more.

Other areas that helped out Britain with the labour shortage were Ireland, South East Asia and various countries from Eastern Europe. In June 1948 Britain there was a period known as the Windrush period. This was when thousands of men sailed to Britain from the Caribbean in hope to find jobs during the labour shortage period. Employers were happy to take on the West Indian men as they were cheaper and even worked harder. Windrush was the name of the enormous boat that connected the 2 countries especially for the labour shortage period. The reason this was mainly men was because the women usually stayed at home to look after the children while the fathers earned money for the family. It would of course be an extra cost to fly children over and feed them, as they would have no purpose to live in Britain. In conclusion I think all of these points played a major part in converting Britain into a multicultural country. However, I do think the strongest factor was that labour shortage after the Second World War. This provided jobs which meant money for those living in less developed countries. This shortage of jobs brought refugees into Britain from all over the world. ...read more.