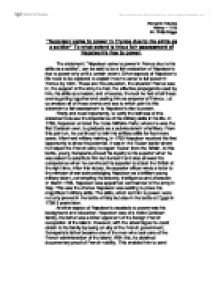 Napoleon came to power in France due to his skills as a soldier&quot; To what extent is this a fair assessment of Napoleon's rise to power?

"Napoleon came to power in France due to his skills as a soldier" To what extent is this a fair assessment of Napoleon's rise to power. The statement: "Napoleon came to power in France due to his skills as a soldier", can be said to be a fair evaluation of Napoleon's rise to power only until a certain extent. Other aspects of Napoleon's life need to be explored to explain how he came to full power in France by 1804. These are: his education, the situation France was in, the support of the army he had, the effective propaganda used by him, his skills as a leader, and of course, the luck he had of all these events getting together and casting him as emperor of France. Let us analyze all of these events and see to which point is this statement a fair assessment to Napoleon's rise to power. Firstly and most importantly, to verify the fairness of this statement lets see the importance of his military skills in his life. In 1785, Napoleon entered the Ecole Militaire Paris; where he was the first Corsican ever, to graduate as a sub-lieutenant of artillery. From this point on, he continued to train his artillery skills for four more years. ...read more.

All people of France feared that all of that which was done at the revolution would be lost. All hopes of France returning to its state of majesty were being lost. People were still shocked with the effects of the Reign of Terror in France. The government, which was set after this historical period, was known as "Directory". It was unpopular and was not supported by the population. Everyone was insecure of what would happen to France in the hands of this new group, which would have the difficult mission, which was to solve the economic problems, which had, just arose and continue to support the revolutionary ideas passed on through the first years of the revolution. All of this unpopularity and insecurity on the new government gave Bonaparte the chance to rise. His will for power was achieved in 1799 in the 'Coup of Brumaire'. Another very important aspect in Bonaparte's rise to power is his ability to use propaganda. Even historians, who don't support Napoleon, agree he had an indescribable ability to use propaganda in his favour. AJP Taylor for instance is someone who doesn't agree to Napoleon's character but says: "The proclamations and bulletins of Napoleon, show him to have been a propagandist of genius..."1 The propaganda Napoleon used was very effective as he was able to create an image of himself as being a young, compassionate, heroic, brave, loyal, talented and magisterial young military officer. ...read more.

When I say he met the right people at the right time, I mean for example he met Josephine his first wife in his early military life. As she was pat of the high aristocracy of France, she was very important in giving him a grater status in society. His war tactics also were helped by his luck. All this luck in his life made his soldier believe him at all times. Therefore, luck made everyone believe him. All trusted him. This was very important. By analyzing all these factors, which did affect Napoleon's rise to power in France we can conclude that it wasn't only his military skills, which were responsible for his escalade to ultimate power in France. But indeed all of these factors had their own importance in Napoleon's rise to power. In my beliefs, if any of these didn't take part of Bonaparte's life, maybe he wouldn't be so successful and so famous until nowadays. Everything in his life worked as if he was born to become a legend. Imagine if his father hadn't decided to become an ally of the French in Corsica. Napoleon wouldn't go study in France and just this simple chance of events would already change all of his life. With this in mind we can see that it wasn't only Napoleon's military skills which were responsible for his conquering of France but all of these events of his life together. ...read more.