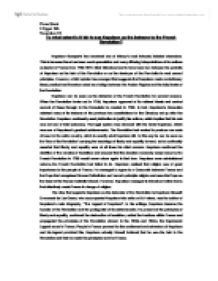 To what extent is it fair to see Napoleon as the betrayer to the French Revolution?

To what extent is it fair to see Napoleon as the betrayer to the French Revolution? Napoleon Bonaparte has remained one of history's most furiously debated characters. This is because there has been much speculation and many differing interpretations of his actions as leader of France from 1799-1815. Most historians tend to have been torn between the portraits of Napoleon as the heir of the Revolution or as the destroyer of the Revolution's most sacred principles. However, a third opinion has emerged that suggests that Napoleon made revolutionary ideas practical and therefore acted as a bridge between the Ancien Regime and the lofty ideals of the Revolution. Napoleon can be seen as the defender of the French Revolution for several reasons. When the Revolution broke out in 1789, Napoleon approved of its rational ideals and carried several of these through to the Consulate he created in 1799. In fact, Napoleon's Consulate retained many of its features of the previous two constitutions for the Directory set up after the Revolution. ...read more.

Napoleon actually himself believed that he was the heir to the Revolution and that he made the principles work for France. However, many historians view Napoleon differently. They see his reforms for France as increasingly autocratic. They perceive that the Legend glorified Napoleon concentrating on the pre-eminence, which we brought to France. The main argument for Napoleon being seen as the betrayer of the Revolution is the autocratic constitution established the dictatorship of Bonaparte. As Consul, Napoleon made a point of ruling as a civilian, but he was more authoritarian than Louis XVI. Napoleon himself declared that France had finished with the romance of the revolution. He centralised the administration, while giving local prefects considerable power in executing the policies of the central government. Officials and military officers were recruited from all over society but they were appointed, not elected. Elections no longer had any meaning. Napoleon set up a Legion of Honour to reward military and bureaucratic service to his state. It was the beginnings of a new nobility. ...read more.

In this way, many historians have described him as an opportunist. He insisted that he would preserve the revolutionary principles that arose in 1792 yet looking back at his reign as Emperor it is clear that not much had really changed since the Bourbon monarchs. He was maintaining revolution but making it acceptable to the rest of Europe, thus he tried to find a compromise. Napoleon created a new form of government in France, reshaped the boundaries of Europe and influenced revolutionaries and nationalists all over the world. Emperor Napoleon I had created a new kind of state in which certain revolutionary ideas (equality under the law, careers open to merit rather than birth, the abolition of feudalism) were combined with an authoritarian state structure and a new nobility to those who served the state well. As time passed, Napoleon increasingly emulated the court of the old regime monarchy. He hoped to take his place among the legitimate monarchs of Europe and even married a Hapsburg to establish his credentials. Therefore I conclude that Napoleon can neither be defined as either the betrayer or the defender of the Revolution only as mixture between the two. Fiona Slack 6 Upper ML November 02 ...read more.