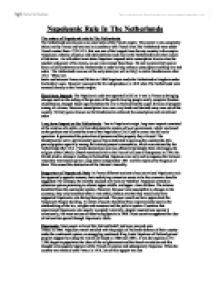 Napoleonic Rule In The Netherlands.

Napoleonic Rule In The Netherlands The nature of Napoleonic rule in The Netherlands: The Netherlands was known as an inner state of the French empire. This meant it was completely taken over by France and was run in accordance with French laws.The Netherlands were under French control from 1792-1813, this was one of the longest times for any country in the empire. Napoleonic reforms of justice and administration took root in the Netherlands and other closely allied states. As with other inner states Napoleon imposed strict conscription laws to raise the number and power of his armies, no one was exempt from these. He sent a paramilitary police force called Gendarmes to the Netherlands in order to help enforce conscription and keep law and order. ...read more.

Military police known as the Gendarmeries enforced the conscription and maintained order. Long term impact on the Netherlands: Due to Napoleonic reign, long-term impacts consisted of the creation of a stable, civilian administrative system of local government, which was based on the prefects and allowed the laws of the Napoleonic Civil Code to come into full-scale operation. It guaranteed the protection of persons and the property they allowed. The Gendarmeries were a parliamentary police force dedicated to policing the countryside, this proved popular especially among the isolated peasant communities, which was retained by the Netherlands after 1814. French domination was also offensive but despite their challenges, the religion of the Catholic Church remained vital to the lives of millions of Europeans. ...read more.

All strata of society benefited from improvements such as the standardising of the law, weights and measures and the judicial system. Countries that experienced Napoleonic rule usually accepted it similarly, despite insurrections against it occasionally, the most serious of these being Spain's in 1808. Most countries supported the idea of nationalism spread through Napoleonic ideals. Opponents: Most people relieved that Holland hadn't just been annexed onto France in 1806. Napoleon wasn't satisfied with the people of Holland's defence of their country under the continental system, as smuggling continued. King Louis Napoleon of Holland gained people's support by aiding the victims of floods in 1808 and 1809 J.D van der capellen (1741-1784) began to popularise the ideas of the enlightenment and the french revolution and this thought led to popular approval of the French revolution and subsequently Napoleon. When the country was annexed onto France in 1810, lots of this support was lost ...read more.