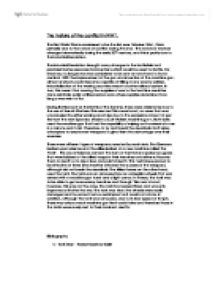 Nature of conflict in World War I

The Nature of the conflict in WW1. The First World War is considered to be the first ever 'Modern War', this is primarily due to the nature of conflict during the war. The nature of warfare changed dramatically during the early 20th century, and this is partly due to the Industrial Revolution. The Industrial Revolution brought many changes to the battlefield as it provided better resources for inventions which could be used for battle. For instance, no longer was war considered to be one-on-one hand to hand combat. ...read more.

This created 'No mans Land', an area that was unoccupied by either warring countries due to the excessive amount of gun fire from the new Spandau Maxim or Colt Vickers machine guns. Both sides used the machine gun that had the capability of wiping out hundreds of men in a minute and it did. Therefore, to try and break the deadlock, both sides attempted to create new weapons to give them the advantage over their enemies. There were different types of weaponry created by each side, The Germans looked upon science and the Allies looked at a new machine called the 'Tank'. ...read more.

The tank was an armoured box on caterpillar wheels that was armed with a machine gun turret and a light canon. In theory, the tank was to be able to get over enemy trenches and through 'No man's Land', however, this was not the case. The tank had several flaws and was only improved until after the war. The tank was slow, the wheels were easily damaged and he canon had no real impact as it could not rotate. In addition, although the tank was armoured, due to its slow speed of 4 mph, there was only so much machine gun fire it could take and therefore those in the tanks were surely sent to their imminent deaths. ...read more.