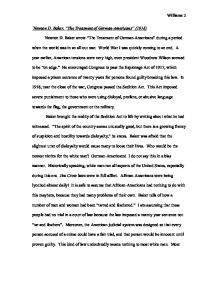 `Newton D. Baker, "The Treatment of German-Americans" (1918) Newton D. Baker wrote "The Treatment of German-Americans" during a period when the world was in an all out war. World War I was quickly coming to an end. A year earlier, American tensions were very high, even president Woodrow Wilson seemed to be "on edge." He encouraged Congress to pass the Espionage Act of 1917, which imposed a prison sentence of twenty years for persons found guilty breaking this law. In 1918, near the close of the war, Congress passed the Sedition Act. This Act imposed severe punishment to those who were using disloyal, profane, or abusive language towards the flag, the government or the military. Baker brought the reality of the Sedition Act to life by writing about what he had witnessed. "The spirit of the country seems unusually good, but there is a growing frenzy of suspicion and hostility towards disloyalty," he states. Baker was afraid that the slightest utter of disloyalty would cause many to loose their lives. Who would be the newest victim for the white man? German-Americans! I do not say this in a bias manner. Historically speaking, white men ran all aspects of the United States, especially during this era. Jim Crow laws were in full affect. African-Americans were being lynched almost daily! It is safe to assume that African-Americans had nothing to do with this mayhem, because they had many problems of their own. ...read more.

America entered World War I in 1917. "Boy Scouts Support the War Effort" (1917) was addressed to the Boy Scouts of America. This seems to be an excerpt from a pamphlet that was sent out to the Boy Scouts to encourage them to support the war effort. These pamphlets were sent out during a period when the world was in an all out war. World War I, like many other wars, caused many people to meet their destiny with death. This article is what I like to call a patriotic article. It appears that these young boy scouts were being used to spread "patriotic" propaganda. "EVERY SCOUT TO BOOST AMERICA AS A GOVERNMENT DISPATCH BEARER," as the writer so passionately writes. I think this is nothing but propaganda. "The world is for liberty and democracy," the writer states. According to who? The United States of America, certainly not to Germany! They were not promoting "Liberty," they wanted more land. In this pamphlet, the writer states that America entered the war as a "scared duty to uphold the principles of liberty and democracy." I agree on the part about "America entered the war," history tells us that this is a fact. On the other hand, I disagree because had Germany not sank our ships; we probably would have not entered the war. World War I is one of the most difficult wars to talk about because everything is so complex. ...read more.

The sting of death no loner affects this man; somehow he had grown immune to the sight of dead men. An issue that disgusts me is the way African-Americans were treated during the war. The writer of this journal gives vivid details on this issue. He despicably states, "The only thing African-Americans are good for is to work on railroads." This is a very prejudice statement. How would this doughboy know what a "Negro," as he refers to African-Americans, is good for? This is a perfect example of what many African-Americans faced back home in the United States. What gave him the idea that an African-American could not fight as well as he could? Well, I will venture to say that this was not something he had just learned, this was something that he was taught from birth. During World War I, the Doughboys fought fearlessly and boosted the morale of British and French troops. The accounts were recorded so that the people in America would be aware of the events that were taking place in Europe. The writer recorded many horrifying things. Some of these things would make the strongest of men cry. I personally disagree with the way he felt about African-Americans, yet I have to come to realize that was the way he was taught to think. I do not understand how a person could think of writing anything in the middle of a war. I would like to think that a person's mind would be on survival and not "journalism." Williams 2 ...read more.