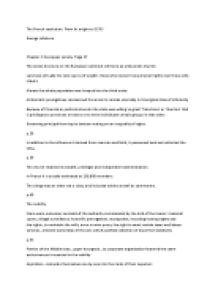 Notes and Reading on the causes of the French Revolution.

﻿The French revolution: From its origins to 1793 George Lefebvre Chapter 3: European society. Page 37 The social structure on the European continent still bore an aristocratic imprint. Land was virtually the sole source of wealth, those who owned it assumed all rights over those who tilled it. Almost the whole population was lumped into the third order. Aristocratic prerogatives condemned this order to remain eternally in its original state of inferiority Because of financial or political interests the state was willing to grant ?franchises? or ?liberties? that is privileges to provinces or towns or to even individuate certain groups in that order. Governing principal from top to bottom resting on an inequality of rights. p.38 In addition to the influence it derived from coercion and faith, it possessed land and collected the tithe. p.39 The church retained its wealth, privileges and independent administration. In France it is usually estimated at 130,000 members. The clergy was an order not a class, and included nobles as well as commoners. p.40 The nobility there were numerous survivals of the authority commanded by the lord of the manor: manorial courts, village surveillance, honorific prerogatives, monopolies, including hunting rights and the rights?to maintain the mills, oven ...read more.

Preserve the personal safety and liberty of all citizens?preventing the future use of lettres de cachet. 4. Ministers not be able to hinder the exercise of the legislative power, nor infringe personal liberty or property by any arbitrary order, even if signed by the king, 5. No general law shall be reputed such in France unless it has either been proposed by the king and accepted by the estates general. 6. ?It is for the Estates General themselves to determine their date of dissolution and of their assembly in the future. 10. The deputies will demand recognition of the right belonging to the nation to give its consent to taxation, to regulate the way I which it will be spent and to scrutinize the way in which it has been spent by means of annually published accounts. 12. Voting by head shall be demanded The Cahier of the clergy of the Saints. Judicial offices?long attracted lively criticism. Complaints?judicial process is too slow. To expensive and too complicated. Paris?only admitting nobles as judges?shuts the door to many honourable and capable men. The territorial jurisdiction of Paris is too large. ...read more.

property of the third estate The Cahier of the inhabitants of Montauroux and Les Adrets The inhabitants protest against the Banalité- the obligation to have their produce pressed at the seigneur’s mill. Spend four or five hours taking their olives and grain there…several people have been drowned…noted with sadness that the seigneur built two new mills but restricted their use to foreigners. Taxation The French peasant bore a heavy burden of taxation. He paid the tithe to the church, Vingtiéme, Taille, capitation and gabelle. [2] These taxations were easily depriving the peasant of any chance to climb higher in the social ladder. They were an extreme burden to them and this was one of their main grievances. The fact that the poorest were being taxed the highest outraged them and in the cahiers they express their distaste with the situation and their need to change the situation. It is discussed by them that not a single person whether they be of nobility, clergy or even some of the richer third estate is paying fair and equal taxes. [3] ________________ [1] Lefebvre, G. The French revolution: From its origins to 1793 P.37 [2] George Rudé. [3] The Cahier of the third estate of Nemours ...read more.