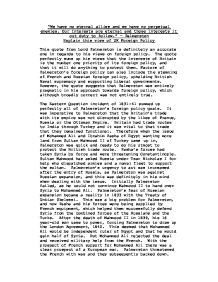 "We have no eternal allies and we have no perpetual enemies. Our Interests are eternal and those interests it out duty to follow." - Palmerston Explain this view of UK Foreign Policy This quote from Lord Palmerston is definitely an accurate one in regards to his views on foreign policy. The quote perfectly sums up his views that the interests of Britain is the number one priority of its foreign policy, and that it will do anything to protect them. Factors of Palmerston's foreign policy can also include the stemming of French and Russian foreign policy, upholding British Naval supremacy and supporting Liberal governments. However, the quote suggests that Palmerston was entirely pragmatic in his approach towards foreign policy, which although broadly correct was not entirely true. The Eastern Question incident of 1831-41 summed up perfectly all of Palmerston's foreign policy goals. It was imperative to Palmerston that the Britain's trade with its empire was not disrupted by the likes of France, Russia or the Ottoman Empire. Britain had trade routes to India through Turkey and it was vital to that trade that they remained functional. Therefore when the issue of Mohammed Ali and Ibrahim Pasha of Egypt wanting more land from Sultan Mahmood II of Turkey came up in, Palmerston was quick and ready to do his utmost to protect the British trade route. ...read more.

This incident shows Palmerston's true pragmatic nature in dealing with foreign policy, Palmerston quite clearly did not take into consideration the principles of who his natural "allies" and "enemies" were, he merely thought about the best way to protect British interests and to stall Russian and French expansion. In this case Palmerston did all this successfully. Palmerston also defended the trade interests of Britain and upheld its naval supremacy in the 1st Opium War with China, 1839-42. After disputes between the Chinese and the British East India Company resulted in the Chinese seizing and destroying �1 million worth of opium, Palmerston was quick to uphold the reputation of Britain as a force that shouldn't be reckoned with. The Chinese rejected Palmerston's request for compensation on the opium and his wish for BEIC merchants to be left alone. This forced Palmerston to defend British honour and win back the compensation, and exploit the situation in order to force additional trading concessions from the Chinese. In 1839 the Chinese Navy was completely outclassed by that of the British. After this came about the Treaty of Nanking, where the UK gained trading rights, UK merchants gained immunity from Chinese law, Britain was awarded �6 million compensation and Hong Kong was leased to the UK until 1997. This incident shows Palmerston acting incredibly pragmatic under the guise of upholding British honour. ...read more.

This incident goes hand-in-hand with Palmerston's quote as his actions suggest that he was merely looking out for Britain's interest in minimising French expansion, not supporting a liberal government. Despite Palmerston's clear-cut pragmatism, he did act of principle when it came to the Don Pacifico Affair and the incident at Kagoshima. Here Palmerston acted on the principle of protecting British nationals. The Don Pacifico involved a man who was technically British, but truly Portuguese. His home was vandalised in Athens and Palmerston decided to take action by blockading at Piraeus and seizing Greek ships. At Kagoshima a British national was accidentally killed in riot, Palmerston then took action by bombarding Kagoshima using Britain's naval supremacy. These two examples show Palmerston abiding by his quote in the titles, and he is (despite their apparent insignificance) following British interests. However, these actions were clearly ones made on the principle of protecting British citizens abroad and his retaliatory decisions stand in contrast to his rational, pragmatic decisions. In conclusion, Palmerston tended to abide by his own quote when it came to foreign policy decisions. Nevertheless, the vast majority of the decisions he made were pragmatic ones that gave the Britain the best deal. The decisions of Palmerston that were possibly principled ones (Don Pacifio, Kagoshima) tended to be more irrational that his pragmatic ones, although, overall Palmerston tended to stand by his quote in the title for the majority of his foreign policy decisions. ...read more.