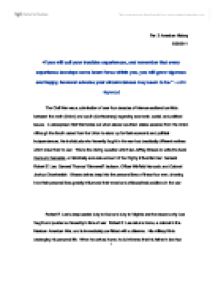 Personal Motives during the Civil War

Per. 2 American History 5/22/2011 "If you will call your troubles experiences, and remember that every experience develops some latent force within you, you will grow vigorous and happy, however adverse your circumstances may seem to be." ~John Heywood The Civil War was a culmination of over four decades of intense sectional conflicts between the north (Union) and south (Confederacy) regarding economic, social, and political issues. A widespread Civil War broke out when eleven southern states seceded from the Union. Although the South ceded from the Union to stand up for their economic and political independences, the individuals who fervently fought in the war had drastically different motives which drew them to war. This is the driving question which led Jeffrey Shaara to write the book Gods and Generals, a historically accurate account of four highly influential men: General Robert E. Lee, General Thomas "Stonewall" Jackson, Officer Winfield Hancock, and Colonel Joshua Chamberlain. Shaara delves deep into the personal lives of these four men, showing how their personal lives greatly influenced their moral and philosophical positions in the war.motifs which drove each of these men in the course of war. Robert E. Lee's deep-seated duty to God and duty to Virginia are the reasons why Lee fought and pushed so fervently in time of war. Robert E. Lee returns home, a colonel in the Mexican American War, and is immediately conflicted with a dilemma. His military life is destroying his personal life. ...read more.

However, this passion turned to hopelessness with the death of his daughter. At this great time of depression, Jackson outpoured his deepest thoughts for God. He remarked, "I have been told that if we do not suppress our love for human things, and give more to God, He... makes us pay great pains." He believed that God always had his reasons, and he takes the death of his daughter to "try harder to please Him" (P. 20). From this point on, Jackson would do whatever it takes to please God. This helped focus his attention toward his duty as a teacher and General in the United States Military. Before the Civil War commenced, Jackson was a teacher at the Virginia Military Institute (VMI). Tom is described as "a teacher with no talent for teacher... but out here, with the guns, there was something [the] cadets could feel" (P. 18). In class Jackson did not evidence his passion for the subject matter. However, when he got out into the field, he knew this is what God wanted him to do, thus exerting the passion which the "cadets could feel". At the turn of the Civil War, Jackson found himself with no assignment. He goes to Robert E. Lee in Richmond, and requests an assignment. He is made the Colonel in charge of a brigade near Harper's Ferry. He affirms Lee, "General, duty has called me, and I can think of nothing that will please the Almighty more than my performing my duty" (p.131-132). ...read more.

A year passes, and he is lecturing his students at Bowdowin, when he notices many of his own students marching outside wearing "fresh and blue [uniforms]" (p. 197). Chamberlain immediately stops his intended lecture, and looks admirably to the young men lined up for duty. He preaches, "If you believe something is truly important, you have an obligation to fight for it." This comes as a reality check for Chamberlain because he feels like a hypocrite preaching to others that they should join in the war if their beliefs direct them to, but not taking the advice for himself. He delivered two very passionate speeches which clearly show Chamberlain is very passionate about the war. However, the motivation for these two very passionate speeches stems from his earlier adolescent moments where he remembers the disappointment his father felt towards him. He rises against this feeling of shame, and begins his journey to becoming a military leader. [a1]topic sentence The death of his daughter strengthened his resolve to the loyalty to God. [AG2]possibly need to talk about how this affected his life during war. If I am not going to be talking about this, make sure to edit the thesis so that I do not have to talk about how it influenced their millitary decisions. This paragraph just states where he says his position. Link two quotes together. [AG3]Party scene Friendship is key to Hancock. Go to the part where they hold the party. Find where he is insistent on staying with Union. p. 127-128 He masters whatever is put in front of him ?? ?? ?? ?? 1 ...read more.