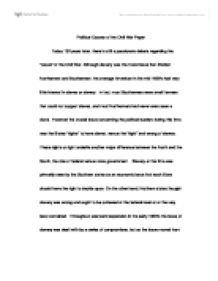 Political Causes of the Civil War

Political Causes of the Civil War Paper Today 130 years later, there is still a passionate debate regarding the "cause" of the Civil War. Although slavery was the moral issue that divided Northerners and Southerners, the average American in the mid 1800's had very little interest in slaves or slavery. In fact, most Southerners were small farmers that could not support slaves, and most Northerners had never even seen a slave. However the crucial issue concerning the political leaders during this time was the States "rights" to have slaves, versus the "right" and wrong of slavery. These rights or right underlie another major difference between the North and the South, the role of federal versus state government. Slavery at the time was primarily seen by the Southern states as an economic issue that each State should have the right to decide upon. On the other hand, Northern states thought slavery was wrong and ought to be outlawed at the federal level or at the very least contained. Throughout westward expansion in the early 1800's the issue of slavery was dealt with by a series of compromises, but as the issue moved from the background to the foreground, political leaders were forced to speak about it. In 1858, Abraham Lincoln stated in his U.S. senate debate that "A house divided against itself cannot stand. ...read more.

I believe I have no lawful right to do so, and I have no inclination to do so." This left the South with very little comfort. At best existing slave states would be allowed to remain, however their power would be diluted as new states were formed that were designated as free. Over time the importance and political influence of Southern slave states would be diminished and threatened. The South depended on slavery to support their agricultural economy. The Southern society believed they could not survive without slavery, and if slavery was abolished their economy would fall. According to the "Crisis of Fear" by Stephen A. Channing, "The election of Lincoln was at once the expression of the will of the Northern people to destroy slavery, and the key to that destruction." Southerners believed the election gave acceptance to antislavery opinions and that it was a matter of time before slavery was minimized and eventually outlawed. With the election of Lincoln and his public antislavery sentiment, Americans believed that the band-aids which held the country together with respect to the issue of slavery would no longer hold. In the past slavery conflicts were resolved through a series of compromises which aimed to keep balance between the number of free and slave states. President Lincoln while publicly stating his antislavery views also went out of his way to support slavery where slavery already existed. ...read more.

The average citizen was illiterate and did not have a high education. Allan Nevis exclaimed in his 1947 "Ordeal of the Union", "The South was for the most part a land without free pubic schools- a land where the poor man's son was likely to go untaught, and the workingman or small farmer to be ignorant if not illiterate. Here lay one of the great gulfs separating North from South..." Although there were social tensions between the North and the South these divergences were not enough to single handedly cause the Civil War. In summary, the most important motive behind the outbreak of the Civil War was the political issues surrounding the role of government and the Presidential election of 1860. Up until the mid 1800's slavery was kept as a background issue that the country dealt with by a series of compromises. However, everything changed with the 1860 election of Abraham Lincoln to the presidency. The South viewed Lincoln as a threat based upon his public views that "slavery was a moral, social and political wrong that should not be allowed to spread" (Danzer 326). Because slavery was such an important part of Southern society, the South felt that they could not survive without it. Convinced that succeeding from the Union was the only way to protect the States rights regarding slavery, eleven states led by South Carolina left the Union to form The Confederate States of America. Lincoln stated that succession was illegal and fought to maintain the Union. The Civil war was now underway. ...read more.