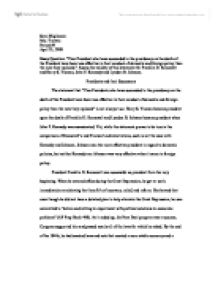 Presidents and their Successors

Along with implementing the 'containment policy' that would govern the United States foreign affairs for decades, Truman delivered the Truman Doctrine. The combination of these policies pledged the United States' assistance to any country attempting to resist the advances of Communism. As Walter Lippmann argued, these policies were too broad in that although "some areas were vital to U.S. security, while others were merely peripheral; some governments deserved U.S. support, others did not..." (AP Prep Book 552). Truman also precipitated the arms race, which had the potential of ending in deadly bombings. Overall, Truman's foreign policies during the Cold War were less effective than those President Roosevelt enacted during World War Two. President Kennedy was not very successful in his domestic policies. He instituted the New Frontier and attempted to pass laws pertaining to "aid to education, federal support of health care, urban renewal, and civil rights" (AP Prep Book 595). Despite the supposed soundness of the laws, President Kennedy was unable to convince Congress to enact most of the laws that he suggested. It was President Johnson, on the other hand, who was able to pass the same programs that Kennedy had proposed. ...read more.

That in itself was illegal, because the Gulf of Tonkin Resolution basically declared war on the Vietnamese, an action that only Congress is allowed to do. The Tet offensive also hurt Johnson's foreign affairs and turned the majority of Americans against him. The Tet offensive, although it was a United States military victory, demoralized the public. Although President Kennedy had some beneficial foreign policies, both he and Johnson were ineffective in their conduct of foreign affairs. President Roosevelt was an effective president with both his New Deal and his actions throughout the Second World War. His successor, Truman, was not effective in either the domestic affairs or the foreign policy. In fact, his programs often had a detrimental effect. Such is not the case, however, with Kennedy and Johnson. As far as domestic policies go, Johnson was the more effective president by far, thereby proving the statement that stated "Vice Presidents who have succeeded to the presidency on the death of the President have been less effective in their conduct of domestic and foreign policy than the men they replaced" to be inaccurate. Although both Johnson and Kennedy were ineffective in their foreign affairs, Johnson, the original vice president was more effective overall than Kennedy. ...read more.