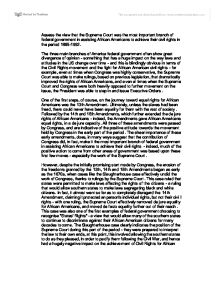 Assess the view that the Supreme Court was the most important branch of federal government in assisting African Americans to achieve their civil rights in the period 1865-1992.

Assess the view that the Supreme Court was the most important branch of federal government in assisting African Americans to achieve their civil rights in the period 1865-1992. The three main branches of America federal government often show great divergence of opinion - something that has a huge impact on the way laws and attitudes in the US change over time - and this is blindingly obvious in terms of the Civil Rights movement and the fight for African American civil rights - for example, even at times when Congress was highly conservative, the Supreme Court was able to make rulings, based on previous legislation, that dramatically improved the rights of African Americans, and even at times when the Supreme Court and Congress were both heavily opposed to further movement on the issue, the President was able to step in and issue Executive Orders. One of the first steps, of course, on the journey toward equal rights for African Americans was the 13th Amendment. Ultimately, unless the slaves had been freed, there could never have been equality for them with the rest of society. Followed by the 14th and 15th Amendments, which further extended the de jure rights of African Americans - indeed, the Amendments gave African Americans equal rights, in a de jure capacity. All three of these amendments were passed by Congress, and are indicative of the positive attitude towards the movement held by Congress in the early part of the period. The sheer importance of these early amendments, does, in many ways suggest that the contribution of Congress did, in fact, make it the most important branch of federal government in assisting African Americans to achieve their civil rights - indeed, much of the positive action to come from other areas of government was based upon these first few moves - especially the work of the Supreme Court. However, despite the initially promising start made by Congress, the erosion of the freedoms granted by the 13th, 14th and 15th Amendments ...read more.

Following Roosevelt's death, his successor, Harry Truman issued further executive orders to fully desegregate the armed forces and commissioned a committee to investigate the state of civil rights in the US, and it issued a report identifying many of the problems present in American society. Unfortunately, however, Truman was unable to persuade a Congress still filled with r****t Southern Democrats to adopt any new changes that might have improved things for African Americans in terms of their Civil Rights. There was also a small number of cases taken to the Supreme Court, thanks to the NAACP, but accusations of communism in the new Cold War era were diminishing their power and resources, and so despite a generally more positive feeling towards the movement, little progress was made by the Supreme Court. In this period, it seems that the Presidency had the most impact on helping African Americans to gain civil rights, though the effect of executive orders was limited, in that passing too many would lead to accusations of the President acting as a dictator. Despite fading into the background somewhat in the 1940s, the Supreme Court made a comeback in terms of making decisions on civil rights in the 1950s. The landmark case was, of course, Brown v. Board of Education, Topeka, Kansas, and it was arguably the turning point in federal government when it came to the rights of African Americans. Dealing primarily with the issue of segregation in schools, the case ruled that it would be unconstitutional to send Linda Brown, the girl for whom the trial is named, to any school other than the one nearest to her, an all-white school. For the first time since Plessy v. Ferguson, the principle of "separate but equal" was challenged, and a new legal precedent was set, one that declared segregation as unconstitutional. Though the enforcement of this case was not strict, it did signal the start of a new era, an era in which other, more liberal still, decisions could be made. ...read more.

Of greatest importance in this period was most certainly Congress, as despite conservative presidents and an increasingly conservative Supreme Court, they were able to make changes that greatly improved and extended the rights of many blacks. As is obvious, there was much change over the period in terms of which branch of US federal government was the most important in helping African Americans gain civil rights. Of course, under presidents such as Franklin D. Roosevelt, executive orders were passed which did huge amounts to end segregation in the workplace, not to mention the fact that many of the acts that were passed in the period were passed with the full support, and campaigning of the President in office, however, too many of the presidents were constrained by the fear of losing votes to make any real difference to any great portion of the African American population. Congress, too, did a vast amount, pushing at many times for the extension of civil rights, despite the hostility of the Presidents, and actually passing many of the bills that, ultimately, confirmed the rights of black Americans - and yet too often, Congress was too heavily dominated by white Southern Democrats to really be considered as the most important branch of federal government. Really, the only branch who can claim to be the most important in terms of civil rights is the Supreme Court. Despite an initially negative viewpoint at the beginning of the period, the Supreme Court also ruled some of the most landmark decisions, such as Brown v. Board of Education of Topeka, cases that set an entirely new precedent, and allowed the moving forward of the civil rights movement. It did of course have one huge advantage - the appointment of judges who serve for life by different presidents means that the Supreme Court is not so easily swayed by public opinion, and does not make decisions based upon what will win them votes - and so r****t white southerners had very little effect on the Supreme Court- which is more than can be said for the other two branches of the federal government. ...read more.

The student answers the question quite well by providing alternative interpretations on the roles of the branches of the federal government, which is good as it shows they have thought about other possible causes of African American civil rights and ...

The student answers the question quite well by providing alternative interpretations on the roles of the branches of the federal government, which is good as it shows they have thought about other possible causes of African American civil rights and aren't just focusing on one event. However, it is hard to see where consideration of one interpretation stops and another begins: it would be better to bring all the arguments for the Supreme Court into one section, all the arguments for Congress into the next section, and all the arguments for the presidency into the next section. This would show that the student had a strong understanding of how the branches of the federal government had different roles to play in the achievement of civil rights. If you did this, you should still talk about other branches of the federal government even if it wasn't in the right section, because that would show the ability to compare an action of one branch to an action of another branch.

The student uses a good range of evidence, including statistics such as "by 1935, 30% of black families were receiving relief". This is good because it shows that the student understands that it was a significant number of people receiving relief, not a tiny, irrelevant percentage. The student is also very good at talking about why things happened and what the effects were, rather than simply telling the story of what happened, which is bad as it takes little thought to remember and write down details. The student instead gives details then says things like "many of these programs did have the knock-on effect of bringing aid to African Americans" - this shows they have thought deeply about what happened to people when the programs were introduced, rather than spending a paragraph talking about the irrelevant details of the programs such as which senator introduced them or how long they took to pass. The conclusion is not explicitly labelled as the conclusion - the student doesn't say "In conclusion..." - which would have been good because it is unclear whether or not this is actually the conclusion. It is vital to have a conclusion - and to leave the examiner in no doubt that it is there - because it shows you can decide which interpretation you have considered is the most likely to be correct. This student does this by saying "the only branch who can claim to be the most important in terms of civil rights is the Supreme Court", but they could improve by labelling the last paragraph as the conclusion.

The essay is sometimes hard to read because the student does not use enough punctuation - the entire introduction, for example, is actually only one sentence. This makes it harder for the examiner to understand because it is not broken up into ordinary sized chunks of information. Also, the essay is not always written in an appropriate style for A Levels - phrases like "this is blindingly obvious" sound exaggerated, and it would be more appropriate to say something like "this was never more obvious". The essay makes good use of vocabulary such as "however", which is good because words like that reiterate the student's knowledge of other interpretations and proves that they can consider other opinions on historical events.