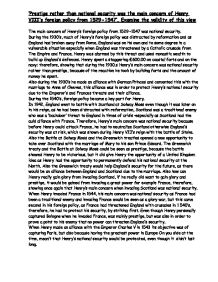 'Prestige rather than national security was the main concern of Henry VIII's foreign policy from 1529-1547'. Examine the validity of this view

'Prestige rather than national security was the main concern of Henry VIII's foreign policy from 1529-1547'. Examine the validity of this view The main concern of Henry's foreign policy from 1529-1547 was national security. During the 1930's, much of Henry's foreign policy was distracted by reformation and as England had broken away from Rome, England was on its own and to some degree in a vulnerable situation especially when England was threatened by a Catholic crusade from The Empire and France. Henry was alarmed by this threat and used monastic wealth to build up England's defences. Henry spent a staggering �600.00 on coastal forts and on the navy; therefore, showing that during the 1930.s Henry's main concern was national security rather than prestige, because of the reaction he took by building forts and the amount of money he spent. Also during the 1930's he made an alliance with German Princes and cemented this with the marriage to Anne of Cleeves, this alliance was in order to protect Henry's national security due to the Emperor's and Frances threats and their alliance. ...read more.

The Greenwich treaty and the Battle at Solway Moss could be seen as prestige, because the battle showed Henry to be victorious, but it did give Henry the opportunity of a Untied Kingdom idea as Henry had the opportunity to permanently defend his national security at the North. Also the Greenwich treaty would help England's security for the future, as there would be an alliance between England and Scotland due to the marriage. Also how can Henry really gain glory from invading Scotland, if he really did want to gain glory and prestige, it would be gained from invading a great power for example France, therefore, showing once again that Henry's main concern when invading Scotland was national security. When Henry invaded France in 1544, his main concern was national security as France had been a traditional enemy and invading France would be seen as a glory war, but this came second in his foreign policy, as France had threatened England with crusades in 1540's, therefore, he had to protect his security, by striking first. ...read more.

The aspect of prestige came as a result of the actions that Henry did with the invasion of France and the Battle at Solway Moss, it wasn't his main concern or intention However, I wouldn't stay that during 1529- 1547, Henry's main concern was national security for his foreign policy, put other factors like succession came into play, because compared to the other great powers of Francis I and Emperor Charles, Henry was a minor, therefore, capturing Bologne and invading France and Scotland would improve his succession and make him into a great power. Also dependable on the situation Henry concerns for his foreign policy may have been different every time, and also his main concern for his foreign policy may have been all the factors of Great Power, Succession, prestige and National security, all together. When he invaded France it was because he would gain glory from attacking a great power, but also because he wanted to secure his national security and his succession. ...read more.