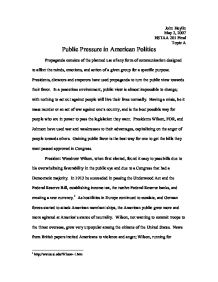 John Heylin May 2, 2007 HSTAA 201 Final Topic A Public Pressure in American Politics Propaganda consists of the planned use of any form of communication designed to affect the minds, emotions, and action of a given group for a specific purpose. Presidents, dictators and emperors have used propaganda to turn the public view towards their favor. In a peacetime environment, public view is almost impossible to change; with nothing to act out against people will live their lives normally. Having a crisis, be it mass murder or an act of war against one's country, and is the best possible way for people who are in power to pass the legislation they want. Presidents Wilson, FDR, and Johnson have used war and weaknesses to their advantages, capitalizing on the anger of people towards others. Gaining public favor is the best way for one to get the bills they want passed approved in Congress. ...read more.

forced Wilson to ask Congress to declare war on Germany. Despite his unpopularity, Wilson managed to pass the Fourteen Points principles, a group of principles he believed he was fighting for into fourteen groups. This legislation won Wilson the Nobel Peace prize and he was heralded as the savior of peace in Europe. Without the backing of the American people, Wilson could have never had the approval of Congress. Without the news from overseas, Wilson never would have been forced into committing troops to the war. During Franklin Roosevelt's tenure as president, he was faced with a great hardship; the Great Depression. Passed over to him from the previous president, Hoover (who believed the best policy to combat the depression was to do nothing3), FDR was handed a presidency that had politically "killed" Hoover. Yet FDR managed to turn the Great Depression to his benefit; he was able to include many of his ideas onto important bills. ...read more.

He used compromising to get civil rights bills passed, funding for poverty programs, and funding for the Vietnam War. The best possible way for a political figure to get something done is to have a majority in the House, Senate, White House, and the Supreme Court. This way, your party's views and propositions can be passed speedily. When dealing with a Congress that is an opposite party, compromising is the only way to get what you want; if the two Houses war against each other, no legislation would ever get passed because then the president would veto all bills from Congress, and then Congress would veto any of the Presidents bills. The only way to speedily pass a bill is to have a majority in all three branches of the government, that way what you want can get passed. 1 http://wwics.si.edu/Wilson~1.htm 2 The Unfinished Nation, Alan Brinkley, 684 (McGraw-Hill, 2000) 3 http://www.learner.org/biographyofamerica/prog21/transcript/page02.html 4 http://www.historylearningsite.co.uk/Lyndon_Baines_Johnson.htm ...read more.