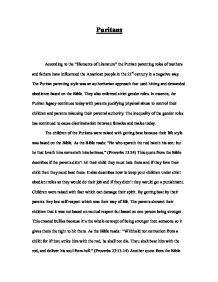 Puritans influenced the people of the 21st century

Puritans According to the "Elements of Literature" the Puritan parenting roles of mothers and fathers have influenced the American people in the 21st century in a negative way. The Puritan parenting style was an authoritarian approach that used hitting and demanded obedience based on the Bible. They also enforced strict gender roles. In essence, the Puritan legacy continues today with parents justifying physical abuse to control their children and parents misusing their parental authority. The inequality of the gender roles has continued to cause discrimination between females and males today. The children of the Puritans were raised with getting beat because their life style was based on the Bible. As the Bible reads: "He who spareth the rod hateth his son: but he that loveth him correcteth him betimes." (Proverbs 13:24) This quote from the Bible describes if the parents didn't hit their child they must hate them and if they love their child then they must beat them. It also describes how to keep your children under strict obedient roles so they would do their job and if they didn't they would get a punishment. Children were raised with fear which can damage their spirit. By getting beat by their parents they lost self respect which was their way of life. The parents showed their children that it was not based on mutual respect but based on one person being stronger. This created bullies because it's the whole concept of being stronger then someone so it gives them the right to hit them. As the Bible reads: "Withhold not correction from a child: for if thou strike him with the rod, he shall not die. Thou shalt beat him with the rod, and deliver his soul from hell." (Proverbs 23:13-14) Another quote from the Bible tells the Puritans not to kill their children when beating them but to make them suffer for God and to remain disciplined. ...read more.

Parents can beat their child as long if it is not a severe beating because it is used as discipline. The Puritans would physically abuse their children often and it was accepted in their culture. If what the Puritans did to their children happened today, the parents would go to jail. People see spanking not in an abusive punishment. They think that it is just a way to discipline their children. Spanking is inappropriate before 15 months of age, should be less necessary after 6 years, and rarely, if ever, used after 10 years of age. (Rocky Mountain Family Council) Now in Norway, Sweden, Denmark, Finland, Iceland, Croatia, Cyprus, Latvia, Italy, Israel, Germany and Austria, it is illegal for a parent, teacher, or anyone else to spank a child. (The Natural Child Project) The European countries don't have a legacy derived from the Puritans. Children should be given equal human rights and should be educated without the threat of punishment. A child growing up in an environment with physical abuse has a great chance to abuse their children and become a violent person. Children don't bond with their parents in the same way if they were hit because it is not human nature to love someone who hurts them. Physical punishment gives the idea that violence towards someone else is alright. The Puritans had very strict gender roles and started at a very young age. A father would bond with his son in skills while the mothers would bond with their daughters. The father would teach his son how to hunt, make tools and to support a family. Women didn't have a choice when her husband told her to do something. Most relationships in the Puritan time was based on fear. Women feared their husband because they would be beat if they disobeyed him. A boy would learn very little of what a girl would. ...read more.

A girl mostly stayed inside with their mother doing chores around the house. The girls would learn how to cook and make clothes to support the family. The father would beat his wife so she would be obedient to him. The inequality of gender roles of the puritans are still in our society today. Men are superior to women in our culture. Males get paid more in jobs, and have more authority than women. In our society now men are more respected, and they govern our nation. Only since 1919 women started getting rights and even at that time they were so discriminated against. People have been surrounded by discrimination and it is just becoming noticed by people. Our society was run by men for hundreds of years until the 1900's when women started getting their rights. Just fifty years ago, women didn't work. All they did was stay at home with their children and clean the house and waited for their husband to return home from work. Now women are getting more employed than ever before because it is accepted now in our culture. Women are still abused by their husbands, which was brought to us by the Puritans. Domestic violence has been around since the Puritans and is still a major problem in today's life. In a national survey 22% of women reported that they had experienced physical assault by a male intimate at some point in their lifetime (Tjaden & Thoennes, 2000a). Typically now, males don't learn how to cook and women don't learn how to work in the yard at a young age. Parenting styles and gender roles have been brought to our society by the Puritan legacy. The strict obedience and corporal punishment that parents had on their children has left behind the same parenting style which many parents still use today. Puritan gender roles have influenced our society now that equality between men and women is unfair. The Puritans saw nothing wrong with abusing someone to keep them disciplined. The equality between the genders is becoming more equal as people are more educated on discrimination. ...read more.