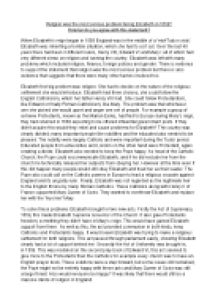 Religion was the most serious problem facing Elizabeth in 1558? How far do you agree with this statement?

﻿Religion was the most serious problem facing Elizabeth in 1558? How far do you agree with this statement? When Elizabeth?s reign began in 1558 England was in the middle of a ?mid-Tudor crisis?. Elizabeth was inheriting a terrible situation, which she had to sort out. Over the last 40 years there had been 3 different rulers, Henry VIII, Edward VI and Mary I all of which had very different views on religion and running the country. Elizabeth was left with many problems which included religion, finance, foreign policies and gender. There is evidence to support the statement that religion was the most serious problem but there is also evidence that suggests that there were many other factors involved too. Elizabeth first big problem was religion. She had to decide on the nature of the religious settlement she would introduce. Elizabeth had three choices; she could follow the English Catholicism, which her father Henry VIII had. She could follow Protestantism, like Edward or finally Roman Catholicism, like Mary. The problem was that whichever one she picked she would upset and anger one set of people. For example a group of extreme Protestants, known as the Marian Exiles, had fled to Europe during Mary?s reign, they had returned in 1558 expecting to be offered influential government posts. ...read more.

The lack of finance also links to religion. If the Pope really did disagree with Elizabeth’s choice in religion he could call on the Catholic powers in Europe to lead a religious crusade, this crusade would need money, something Elizabeth didn't have. This could mean that England could be overthrown by foreign powers due to the country being in such high debt. By 1585 Elizabeth had managed to pay off Mary’s debt and build up a reserve of £300,00 by cutting back on expenditure - like ending the ongoing war with France and building no stately homes or palaces. Elizabeth also managed to end debasement, therefore putting faith back into the economy. However although this was a solution it took many years to put in place, in that time England's security could have been put under threat and with no money the country would have failed to defend itself and could have been lost to a foreign power. Finance was a serious problem for Elizabeth, it threatened the security of the country and lead to the weakening of the economy and therefore the people of England suffered. In 1558 Elizabeth had to deal with several foreign affairs. Firstly in France, France was one of England's biggest enemies because of its size. France at the time was looking after Mary Queen of Scots and was a Roman Catholic country. This increases the seriousness of religion. ...read more.

Finally Elizabeth overcame of the issue of religion by taking the title of Supreme Governor instead of the head of the church. This problem is probably the least serious, it seems her gender didn't hold her back but instead helped her to become a more successful Queen. In conclusion I agree with the statement. Religion was the most serious problem facing Elizabeth in 1558. It was important that Elizabeth picked the right religion, if she didn't it could lead to an even bigger divide in England. It could lead to rebellions and maybe even a civil war. However no matter what she choose it would be impossible for her to keep everyone happy. I also think the acts didn't do enough, Elizabeth it seemed was trying to mix the two religions together and I think that neither Protestant nor Catholic really wanted this; they wanted to be totally independent from each. Religion was also a massive factor in finance, Elizabeth had to please people like the Pope otherwise England could end up in another war which would have cost thousands of pounds. Foreign affairs was also affected by religion, Mary Queen of Scots had lots of support abroad and unless Elizabeth settled religious difference between England and other countries she could find herself being overthrown or even murdered by the French for her crown. So overall Religion affected nearly every problem, if Elizabeth had made the wrong decision the country could have been thrown into another war and an even deeper debt. ...read more.