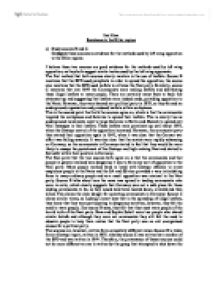 Keri Hilton Resistance to the Hitler regime a) Study sources B and C. Compare these sources as evidence for the methods used by left wing opposition to the Hitler regime. I believe these two sources are good evidence for the methods used by left wing opposition, as they both suggest similar tactics used by the left wing opponents. The first method that both sources clearly mention is the use of leaflets. Source B mentions that the KPD used pamphlets in order to spread the opposition, the source also mentions that the SPD used leaflets to criticise the Nazi party. Similarly, source C mentions that into 1937 the Communists were making leaflets and distributing these illegal leaflets to many people. There are certainly many facts to back this statement up and suggesting that leaflets were indeed made, providing opposition to the Nazis. However, they were banned as a political party in 1933, so they formed an underground organisation and produced leaflets within workplaces. This is the second point that both the sources agree on, which is that the communists targeted the workplaces and factories to spread their leaflets. This is clearly true as underground movements went to large factories in Berlin and Munich to spread anti Nazi messages in their leaflets. ...read more.

These points will later be picked up on by many of the sources. Source D also mentions that the resistors were only a minority. This was very much the truth. Stories of resistance by Germans to the Nazis are hard to find and perhaps the most well known story is that of Hans and Sophie Scholl. These two created leaflets talking about many of the atrocities committed by the Nazis, they then set about spreading them amongst other youths at Munich University. They believed that they would truly have an effect, however, the support for their leaflets was minimal and as a result they were reported to the Gestapo, who placed SS officers at the university in the hope of catching any "traitorous" activity. The Scholl's were caught and executed by the Gestapo and in reality had very little effect on their fellow peers' points of view. This source, like source C, also talks about how these were, in reality, acts of courage and sacrifice. Most people in Germany realised that resistance to the Nazis would result in certain imprisonment and possible death; this helped to ensure that the resistance to the Nazi party was very minimal. Thousands of Nazi opponents were sent to labour or concentration camps, after being reported to the Gestapo by fellow Germans who were so fearful that they were forced to comply with the rules laid down by the Nazis. ...read more.

Therefore, giving fear of a communist take over as the reason for the lack of opposition, is a poor suggestion and is merely an excuse for the intimidated and scared Germans, who could only "grumble" against the Nazis, instead of being more prepared to seriously fight against the Nazi party. I believe that these sources do show that the opposition was too weak to challenged the Nazis, however, I believe that the key reason for the weak opposition was the fact that the Nazi regime was so good at preventing the opposition and crushing any slight form of opposition they saw. This can be seen as both sources C and D mention the fact that everyone realised how dangerous it was to rebel against the Nazi party. The clearest sign of ruthless Nazi reaction was the reaction to the July Plot of 1944. Claus von Stauffenburg placed a bomb in an office where Hitler was in a meeting, unfortunately the bomb was moved from its original position and the walls took the impact of the blast. As a result Hitler was not killed and was barely injured; however, some 200 conspirators were hunted down and ruthlessly murdered. I therefore believe that sources showed that the opposition was weak, however, I do not believe that this was the oppositions' fault, I think that the Nazis were some prolific and ruthless, that opposition to them stood no chance in stopping the Nazis. ...read more.