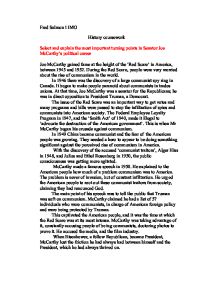 Fred Salmon 11MO History coursework Select and explain the most important turning points in Senator Joe McCarthy's political career Joe McCarthy gained fame at the height of the 'Red Scare' in America, between 1945 and 1952. During the Red Scare, people were very worried about the rise of communism in the world. In 1946 there was the discovery of a large communist spy ring in Canada. It began to make people paranoid about communists in trades unions. At that time, Joe McCarthy was a senator for the Republicans; he was in direct opposition to President Truman, a Democrat. The issue of the Red Scare was an important way to get votes and many programs and bills were passed to stop the infiltration of spies and communists into American society. The Federal Employee Loyalty Program in 1947, and the 'Smith Act' of 1940, made it illegal to 'advocate the destruction of the American government'. This is when Mr McCarthy began his crusade against communism. In 1949 China became communist and the fear of the American people was growing. They needed a hero to appear to be doing something significant against the perceived rise of communism in America. With the discovery of the accused 'communist traitors', Alger Hiss in 1948, and Julius and Ethel Rosenberg in 1950, the public consciousness was getting more agitated. McCarthy made a famous speech in 1950. He explained to the American people how much of a problem communism was to America. The problem is never of invasion, but of constant infiltration. He urged the American people to root out these communist traitors from society, claiming they had renounced God. The main point of his speech was to tell the public that Truman was soft on communism. McCarthy claimed he had a list of 57 individuals who were communists, in charge of American foreign policy and were being protected by Truman. This captivated the American people, and it was the time at which the Red Scare was at its most intense. ...read more.

The conclusion of this Commission was basically that Oswald had fired three shots at the President, but that it was quite likely that he was involved in a vast conspiracy. They advised the government to look deeper into it, but as yet there has been no new investigation. Between the 1964 Commission and the 1976 Commission, there had been an investigation headed by Jim Garrison, the District Attorney of New Orleans. He took a man named Clay Shaw to court, claiming he was part of the conspiracy to kill Kennedy. Garrison said Clay Shaw knew Oswald, and had organized the whole scheme. It was decided by a jury that he was not guilty, mainly due to key evidence that could not be brought to court due to difficulties in the way the investigation took place. Garrison believed in what Oswald had said when he was originally arrested; Oswald claimed he was just a 'patsy'. Garrison thought he was a scapegoat in a much wider conspiracy. So when all the evidence is stretched out in front of us it all seems very confusing, dizzying even. There is no way to sort out truth from fact anymore, and to be honest I feel we may never know the real truth. The evidence points towards Oswald being the shooter, but it is not a definite fact, it also points towards some sort of conspiracy, a conclusion that could be jaded by corrupt evidence. It looks as though we will have to wait until 2029, when all the documents on the assassination will be released, to find out at least some truth about what happened on the 22nd November 1963 in Dealey plaza. Who did more to undermine the trust that many Americans had in the office of President - Lyndon Johnson or Richard Nixon? Both Johnson and Nixon were in office for two terms, so they must have at least looked like they were doing something right. ...read more.

Eventually it became apparent that Watergate was not the only illegal operation that Nixon had been involved in, there had been more hush money, more bugging. Nixon kept on trying to appeal to the public, claiming his innocence. But everyday people began to lose more and more trust in him. It was then uncovered he had tapes in his office, he had recorded all his conversations, but he would not allow anyone to have these tapes. Even when the Supreme Court ordered him to hand the tapes over, he still made excuses. Eventually, when he did give them Fred Salmon 11MO up, he only selected some of them, and one had a large 18-minute gap in a very key part of a conversation. This led the public to lose all trust in the President as he kept on appealing and saying he was innocent. Eventually, just before he would have been impeached, Nixon was the first president in history to resign his office. He had severely damaged the public's trust in the presidency, and the way in which politics is run. With all the facts aligned in a contrasting way we can see how each President dealt with similar crisis. As regards the Vietnam War, they both made a lot of mistakes as far as trying to get the public to trust them in their decisions, especially as they chose to hide much from the public anyway. However Nixon finished the war and as such resolved the crisis far better than Johnson. Nixon also dealt with the Black civil rights more confidently, by stamping out the entire 'Black Power' movement which had been endangering society for the past few years. Although not doing as much as it was intended to, Johnson's 'great society' was not unpopular; he was at least trying to improve America. Ultimately, however it was Nixon who undermined the trust of the American people the most because of 'The Watergate Scandal' when he lied to the public constantly. He resigned because of this dishonesty and he never recovered his political influence. ...read more.