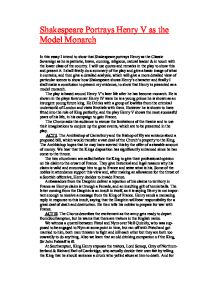 Shakespeare Portrays Henry V as the Model Monarch In this essay I intend to show that Shakespeare portrays Henry as the Classic Sovereign as he is patriotic, brave, cunning, religious, natural leader & in touch with the lower class of the country. I will use quotes and remarks in the play to show this and present it. I shall firstly do a summery of the play and give a basic image of what it contains, and then give a detailed analysis, which will give a more detailed view of particular scenes to show how Shakespeare shows Henry's character and finally I shall make a conclusion to present my evidence, to show that Henry is presented as a model monarch. The play is based around Henry V's later life after he has become monarch. He is shown in the plays forerunner Henry IV were he is a young prince he is shown as an insurgent young future king. He Drinks with a group of lowlifes from the criminal underworld of London and visits Brothels with them. However he is shown to have fitted into the role of King perfectly, and the play Henry V shows the most successful years of his life, in his campaign to gain France. The Chorus asks the audience to excuse the limitations of the theatre and to use their imaginations to conjure up the great events, which are to be presented in the play. ACT I. The Archbishop of Canterbury and the Bishop of Ely are anxious about a proposed bill, which would transfer a vast deal of the Church's property to the King. The Archbishop hopes that he may have averted this by the offer of a sizeable amount of money. We hear that the Kings disposition has significantly enhanced since he has come to the throne. The two churchmen are called before the King to give their professional opinion on his claim to the crown of France. ...read more.

decides to return to England to make a dishonest living in the underworld of London. King Henry's and his nobles greet the French. Henry then sends his advisors to discuss the peace terms with the French King whilst he talks with Katherine, easier said than done as neither can speak the others language. This language barrier helps to make he scene more comical also he cannot win her over with fancy words and so must gain her love with just a few plain spoken words. After a brief talk with Katherine, she agrees to marry Henry with her fathers consent. The French King agrees with the Peace terms and also with Katherine's marriage to Henry with the hope that there will be peace between the two countries. The Chorus apologises again for the shortcomings of the drama. We are also that tragically his son Henry IV lost all of Henry V's gains. Now I shall show Henry's character more clearly in my Detailed Analysis. The Chorus tells us of the excitement and anticipation in England as the King and his followers prepare for war. We learn that the French have bribed three English traitors to murder Henry before he sets sail. When we next see the King he will be in Southampton. The business-like preparations of the English contrast with the vanity and show of the French nobles later in the play. The audience would be curious about the outcome of the murder plot. Act II scene II. This scene shows Henry's cunning side. Some of the English lords are discussing the villainy of the traitors in their midst when the King enters in the company of the 3 conspirators. He asks their opinion of the prospects for his invasion of France. They answer with encouraging words and praise him as being the greatest King ever " never was a monarch better feared and loved". ...read more.

Henry disagrees and points out that the smaller the army the greater the honour if they win. To emphasise this point he offers free passage home for any man who wishes to leave. He tells them that this is the feast day of St Crispian and promises that those who survive would never forget it. On the anniversary they will be proud to show their wounds and tell the story of the battle. It will be passed down in history and those who were not present will envy them. Salisbury arrives to announce that the French are ready to attack. He is followed by Montjoy the French herald with another enquiry about Henry's ransom price should he be captured. Henry offers nothing but his bones, if the French manage to kill him. He sends a defiant reply to the constable of France saying that his soldiers may look poor and dirty but their hearts are ready and willing. He tells Montjoy not to come asking about ransom again. Relationshipss between Hnry and his nobles are friendly and caring, he also cleaverly makes a virtue out of their small numbers to inspire confidence in his followers, he encourages them to think themselves as privileged to be present . they are about to make history. He also flatters them by calling them "his band of brothers". He generously allows the Duke of York the honour of leading the main body of troops. In this essay I have tried to prove that Shakespeare portrays Henry as the model monarch the point of this essay was to put forward my points on why I think this and a short general summery on the whole play. In this essay I have shown that Henry is a devoutly religious man. That he has a good knowledge of scripture and other areas of learning, also Henry's physical courage is never in doubt. We see him leading his men at the seige of Harfleur and hear that he has been in personal combat at Agincourt. As a leader of men Henry has a wonderful insight. ...read more.