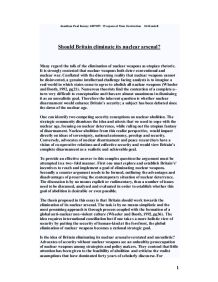 Should Britain eliminate its nuclear arsenal?

Jonathan Paul Kenny: 4007055 Weapons of Mass Destruction Dr.Rendell Should Britain eliminate its nuclear arsenal? Many regard the talk of the elimination of nuclear weapons as utopian rhetoric. It is strongly contested that nuclear weapons both deter conventional and nuclear war. Conflated with the discerning reality that nuclear weapons cannot be disinvented, a genuine intellectual challenge facing analysts is to imagine a real world in which states come to agree to abolish all nuclear weapons (Wheeler and Booth, 1992, pg21). Numerous theorists find the contention of a complete u-turn very difficult to conceptualize and thus are almost unanimous in dismissing it as an unrealistic goal. Therefore the inherent question is whether nuclear disarmament would enhance Britain's security; a subject has been debated since the dawn of the nuclear age. One can identify two competing security conceptions on nuclear abolition. The strategic community dismisses the idea and attests that we need to cope with the nuclear age, focusing on nuclear deterrence, while ruling out the utopian fantasy of disarmament. Nuclear abolition from this realist perspective, would impact directly on ideas of sovereignty, national autonomy, prestige and security. ...read more.

Minimum deterrence as strategists advocate does work in a US-Russian context but uncertainties resonate when applying deterrence rationality in the politically volatile Third World. Waltz and strategic theorists believe states co-exist in a condition of anarchy with a very real security dilemma existing (Waltz, 2002, pg4). The concept of deterrence, as history shows, has prevented a general war between major powers since 1945. This is why many heavily criticise the case for nuclear disarmament and instead champion the concept of minimum deterrence. Minimum deterrence is a practical policy of reducing arsenals low enough without jeopardizing a countries security. Advantages include reducing damage, making forces easier to control and setting a good example to potential proliferators. Charles Glaser claims that total disarmament could make war more likely thus adopts the strategy of minimum deterrence. He attests that the pre-requisite for disarmament is excellent robust political relations. However if relations are this good the probability of nuclear war would be just as low in a nuclear armed world (Glaser, 1998, pg113). In his article 'The Flawed Case for Nuclear Disarmament' he illustrates the problems of designing arrangements to provide states with the confidence that they would be secure in a disarmed world. ...read more.

Strategic realists believe stable nuclear deterrence can be made to work forever. However they work on an unusual paradox. Their beliefs are based on the philosophy and understanding of a state of anarchy yet they still believe nothing can go catastrophically wrong with order founded on nuclear deterrence. For many this equates to a 'realist fiction' (Wheeler and Booth, 1992, pg 29). Furthermore as Schell states " it is easy to forget that nuclear peril flows from the nations that process nuclear weapons not from those that don't" (Schell, 2000, pg42). Therefore Britain should pull its proverbial finger out and set a good example to the rest of the world. Rendell agrees and contests that "Britain and France should disarm, other nuclear powers should cut the potential costs to future generations by adopting a strategy of minimum deterrence" (Rendell, 2005, pg2). It is inconceivable, moreover unrealistic, to predict a grand treaty and instant security parity. The most promising approach is through 'process utopia' with intermediate stages, gradual adjustments and partial accomplishments (Wheeler and Booth, 1992, pg53). The European Union has the potential to be at the forefront in the development of fresh more realistic strategies in attempt to work towards reducing the resonating effects of drugs throughout society, losing the U.S. deterrence paradigm along the way. Is this possible? Only time will tell. ...read more.