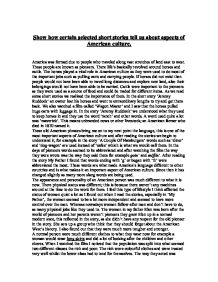 Show how certain selected short stories tell us about aspects of American culture.

Show how certain selected short stories tell us about aspects of American culture. America was formed due to people who traveled along vast stretches of land east to west. These people are known as pioneers. There life's basically revolved around horses and cattle. The horses played a vital role in American culture as they were used to do most of the important jobs such as pulling carts and carrying people. If horses did not exist then people would not have been able to travel long distances and explore new land, also their belongings would not have been able to be carried. Cattle were important to the pioneers as they were used as a source of food and could be traded for different items. As we read some short stories we realized the importance of them. In the short story 'Jeremy Ruddock' an owner lost his horses and went to extraordinary lengths to try and get them back. We also watched a film called 'Wagon Master' and I saw that the horses pulled huge carts with luggage in. ...read more.

Since then it has changed slightly as many more slang words are being used. The appearance and personality of an American person was much different to what it is now. There physical status was different; this is because there weren't any machines around at the time to do the work for them. I feel this type of lifestyle I think affected the status of women quiet a lot as I found out when I read the stories, especially in 'My Father', the women seemed to be a lot more independent and seemed to have more control over the men. Whereas nowadays women follow after men and don't have to do, as many physical jobs like they used to. The women in my father Elen was born after the world of pioneers and her parents weren't pioneers they grew Elen up in a normal modern state, this reflected in the story, as she didn't have any respect for the old pioneer in the story. She sets up a group who think that they should forget about the American West's history. ...read more.

When we watched a typical American western film I realized how tough it was for a pioneer to succeed in their life. They weren't able to walk down to a shop and buy food; no they had to grow it themselves. There were vast stretches of flat, bare and sandy pieces of land with little vegetation. This made it difficult to find a good enough area near water to settle and have a fairly good lifestyle. Houses were made out of natural materials such as wood. But as time has passed and technology has improved things have changed buildings are now made from other materials, as it is cheaper, also the range of clothes has changed as more materials have been recognized for making clothes. We read some short stories and tried to find out if any of them gave us any more information on American culture. The word culture is a certain way of life of a society; it embraces many different aspects of life such as language, music and history. The first story we read was called 'A couple of ...read more.