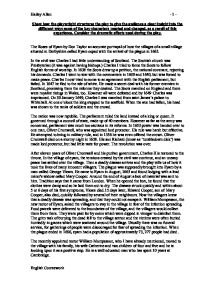 Show how the playwright structures the play to give the audience a clear insight into the different ways some of the key characters reacted and changed, as a result of this experience. Consider the dramatic effects used during the play.

Show how the playwright structures the play to give the audience a clear insight into the different ways some of the key characters reacted and changed, as a result of this experience. Consider the dramatic effects used during the play. The Roses of Eyam by Don Taylor an accurate portrayal of how the villages of a small village situated in Derbyshire called Eyam coped with the arrival of the plague in 1665. In the civil war Charles I had little understanding of Scotland. The Scottish church was Presbyterian (it was against having bishops.) Charles I tried to force the Scots to follow English forms of worship. In 1638 the Scots drew up a petition, the national covenant, rejecting his demands. Charles I went to war with the covenanters in 1639 and 1640, but was forced to make peace. Charles I now tried to come to an agreement with the English parliament, but failed. In 1647 he fled to the isle of white. He made a secret deal with his former enemies in Scotland, promising them the reforms they desired. The Scots marched on England and there were royalist risings in Wales, too. However all were defeated and by 1649 Charles was imprisoned. ...read more.

William Mompesson, the new rector of Eyam, asked the villagers to stay in the village in fear of the infection spreading. Food parcels were delivered to the boundaries of the village, and the villagers would collect them from there. They were paid for by coins which were dipped in vinegar to disinfect them. The grim task of burying the dead fell to the village sexton and the victims were often buried hurriedly in graves which were scattered around the village. Usually there was no funeral service, for gatherings of people were discouraged for fear of spreading the infection. When the plague ended in 1666, eyam had a population of approximately 73, 277 people had died. The recently appointed rector William Mompesson, who I have already mentioned, moved to the village with his family, his wife Catherine and two children of four and five and he is looking upon it as a positive step. He is a well educated man who has spent 10 years at Cambridge. "My intelligence could have made me a civil servant or a diplomat...I chose Christ because of a vision...In eyam I shall lay the first foundation of God's house..." He is first shown around the village by his patron, George Saville who thinks the village itself is bleak. ...read more.

She is having doubts and is worried about her children as they are only four and five and she doesn't want them to die. "...must I go in to our children and say to them, my darlings, you're only four and five , but your father says you must be strong, so if you die neat week without having had any life you mustn't mind, because that's what god wants..." Also at the time of this conversation we have an example of stage craft as there are two conversations at the same time. His one between mompesson and Catherine and Stanley having second thoughts about shutting up the village. However both of these are resolved as mompesson decides to send his children away and Stanley talks to mompesson about his doubts and they are resolved. As we reach the end of the play all of these characters have changed in a way. Stanley decides to put aside his dislike for the new rector and helped to rid the village of the plague. Mompesson had doubts at the beginning and thought about leaving but he stuck it out and helps to get rid of the plague, and Catherine is very positive at the beginning supporting mompesson but even she shows she has doubts about the village. Hailey Allen - 1 - English Coursework ...read more.