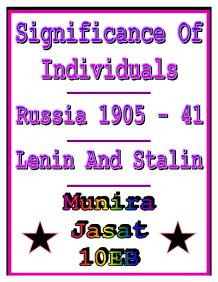 1. Compare the characters and beliefs of Lenin and Stalin. (6) Firstly, I will be looking at the characters of both Lenin and Stalin and the similarities and differences between them. There were many similarities between the characteristics of Lenin and Stalin. Firstly, both were branded ruthless through their use of terror during their reign. With Lenin, it was through War Communism during the Civil War in which 7 million people died from famine whilst Lenin continued to export grain even in the knowledge that his people were dying. His tyrannical form was also shown through his orders to the Red Army to kill many of the innocent soldiers at Kronstadt. Their only crime was expressing their freedom of speech and protesting against War Communism. Although Lenin listened to these protests and changed his ways, he still felt the need to kill the very people who had helped him succeed with the Revolution. Stalin showed his ruthlessness on a more extreme scale than Lenin but nevertheless both still used terror. 10 million died as a result of the Purges in which anyone was targeted in most cases for no apparent reason with a further 18 million being sent to labour camps. ...read more.

Once he did gain power, he continued to be a megalomaniac who was of the impression that people were against him. He even had his food tested for poison by his doctor, as he was sure that people were trying to kill him. Lenin, on the other hand was never described as a megalomaniac and always appeared to be approachable, especially towards his people. He did not tend to be an aggressive person and even saw through Stalin's cunning ways just before he died, describing him as "too rude". There were also many differences and similarities between the beliefs of Lenin and Stalin which I will be looking at now. Firstly, for the similarities, both could be accused of going back on Communism. The October Revolution had overthrown the old order, ruthlessly suppressed and purged the Tsarist state; but in conditions of chronic economic and cultural backwardness, the elements of the old order were everywhere creeping back into positions of privilege and power. Lenin adopted the NEP (private ownership and profit), which stabilised the economy, but created new dangers by encouraging the growth of small capitalism, especially in the countryside where the rich kulaks gained ground at the expense of the poor peasants. ...read more.

In 1920, Lenin even tried to spread Communism to Poland but failed. However, with Stalin he believed that Russia must be made strong before having a world Revolution and they must concentrate on building up and modernising the country. He wanted 'Socialism In One Country'. Another major difference between their beliefs was the arrangements for Lenin's funeral and the 'Cult of the individual'. Stalin had Lenin embalmed and on display to the public announcing that this is what Lenin would have wanted. In reality, Lenin would have wanted no such thing and detested the idea of being on constant display to the public. This was supported by his wife's opinion. Krupskaya knew Lenin's feelings towards the idea and tried to prevent Stalin from having him embalmed but failed. She said, "Do not build memorials to him...all of this meant so little to him...Lenin didn't want it." Stalin also treasured Lenin's memory by renaming Petrograd to Leningrad. In conclusion, there are many differences and similarities in both Lenin and Stalin's characters and beliefs. Overall, in their character, they are generally different and have many contrasting characteristics. However, in their beliefs they are mainly similar. I think this is because Stalin liked to portray himself in Lenin's shadow so felt it necessary to copy some of his beliefs but take them a step further. ...read more.