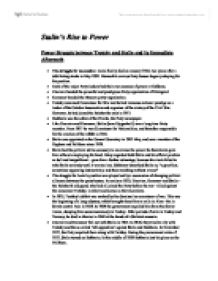 Stalin's Rise to Power Power Struggle between Trotsky and Stalin and its Immediate Aftermath * The struggle for succession: Lenin finally died on January 1924, two years after a debilitating stroke in May 1992. Meanwhile various Party bosses began jockeying for his position. * Each of the major Party leaders had their own sources of power or fiefdoms. * Zinoviev headed the powerful and prestigious Party organisation of Petrograd * Kamenev headed the Moscow party organisation. * Trotsky remained Commissar for War and he had immense national prestige as a leader of the October Insurrection and organiser of the victory of the Civil War. However, he had joined the Bolsheviks only in 1917. * Bukharin was the editor of the Pravda, the Party newspaper. * Like Zinoviev and Kamenev, Stalin (born Djugashvili) was a long time Party member. From 1917 he was Commissar for Nationalities, and therefore responsible for the creation of the USSR in 1924. * Stalin was appointed as the General Secretary in 1922 May, and was a member of the Orgburo and Politburo since 1919. ...read more.

After periods of exile in Turkey and Norway, he died in Mexico in 1940 at the hands of a Stalinist assassin. * Zinoviev and Kamenev fell out with Stalin in 1925. In 1926, they tried to ally with Trotsky and the so-called 'left-opposition' against Stalin and Bukharin. In November 1927, the Party expelled them along with Trotsky. During the procurement crisis of 1927, Stalin turned on Bukharin. In the middle of 1929 Bukharin lost his place on the Politburo. * The Civil War habit of electing those the centre wanted elected had taken firm hold. And it was Stalin through the Secretariat, who benefited from it. Increasingly opposition leaders believed that the votes that defeated them reflected not the free decisions of the Party delegates, but the disciplined organisation of a unified Party machine directed by the General Secretary. And the Secretariat's power of appointment transfer gave the machine wide disciplinary powers over its members. * The existence of a one party state gave the Party control over all positions of influence within the Soviet Union, controlling careers in the military, industry, education, the arts and sciences. ...read more.

* By 1928, Stalin was becoming identified with a forceful economic strategy that had great appeal to many Party members. It simply had to return to the forceful methods that 'had worked so well' during the Civil War. This appealed to many within the Party, while his resistance to demands for greater democracy within the Party earned him the support of the crucial provincial Party secretaries, for it shielded them from excessive scrutiny. His approach to the peasantry increased the influence of the secret police and earned him valuable support within the police apparatus. He also managed better than any of his rivals to present himself to the Soviet public as the legitimate heir of Lenin. * Christian: "In short, despite the great influence he wielded through the Party Secretariat, Stalin, like any other politician, had to negotiate, compromise and coax potential supporters to get the Congress or Central Committee votes that built up his power and buried his rivals. * By 1930 he was already undisputed boss the Party and the Government. By 1937, he had acquired a personal power more extensive and more arbitrary than any Russian leader since Ivan IV. ...read more.