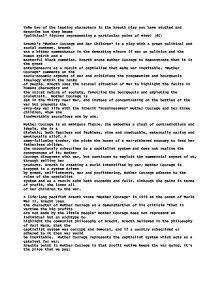 Take two of the leading characters in the Brecth play you have studied and describe how they beome&quot;political&quot; figures representing a particular point of view?

Take two of the leading characters in the Brecth play you have studied and describe how they beome "political" figures representing a particular point of view? (40) Brecth's "Mother Courage and Her Children" is a play with a great political and social context. Brecth was a bitter commentator in the devasting efecrs if war on politics and the human spirit and a masterful black comedian. Brecth wrote mother Courage to demonstrate that it is the great enterpeneaurs as a result of captialism that make war inevitable. "Mother Courage" comments on the socio-ecoomic aspects of war and criticises the pragamatism and bourgeouis ideology within the ranks of people. Brecth uses the ususual situation of War to highlight the faults in humans characters and the unjust nature of society, favouring the bourgeouis and exploting the proletrait. Mother Courage is set in the Thirty Year War, and insteas of concentrating on the battles of the war but presents the evry-day war life with the inherit "Bussinessman" Mother Courage and her three children, whom she inadvertably sacrafices one by one. Mother Courage is an ambigous figure. She embodies a clash of contradictions and ideals, she is a dialetic; both fearless and feckless, wise and uneducable, maternally caring and emotionally allof. A camp-following trader, she picks the bones of a war-withered economy to feed her fatherless childen. She unconciously subscribes to a captialist system and does not realise the consquences of it; Mother Courage disagrees with war, but continues to exploit the commercial aspect of ot, through selling her products. Brecth is creating a world intensified by war; Mother Courage is trapped in a system driven by greed, self-interest, war and profittering, Mother Courage adheres to the rules of the captialist system and as a result ashe both succedds and fails. Although she gains in terms of profit, she loses all of her children to the war. A life-long pacifist Brecth wrote "Mother Courage" in 1939 at the onset of World War II. ...read more.

The play is essentially a critisism of materialism, the making of money at the expense of humanity. Mother Courage represents this critisism of materialism as a result of the captialist system; because money keeps her away from her children, when they need her most. Brecht tries to convey his anti-war message through the characterisation of Mother Courage, there is the focus that as a 'little person' representing the proletarait ahe can only conduct a small bussiness. The Seargant is a narrator expressing Brecth's point of view, observing that Mother Courage is wasting her time trying to "get fat off war" but give "nothing in return." Eventually she will have to sacrafice her children to the war, to keep the bussiness going; this is a parallel to how the bourgeouis continue to conduct the bussiness of war through the sacrafices of the lower classes. This is a critique of how the government exploits the lower masses and how the captialist and democratic system favours the elite group of the bourgeoius and opresses the proletrait. At the end of the play, Mother Courage continues in trading despite the consquences that have arisen due to her submission to the captialist system. Her survival is based on the banal- she has limited imagination and cannot understand her own madness, and so continues her life as a merchant QUOTE. Mother Courage has no consideration for the causes or consideration for what the war is about; swapping sides in the middle of the war and only thinking about her own profit QUOTE. Her outlook on life is simple and basic, she is not so much a war profiteer villian but is a political represenative of a small bussiness buffered by circumstances and clinging to what dooms it; captialism and war "I hope I can pull the wagon by myself. Yes I'll manage, theres not much in it now. I must get back to bussiness." ...read more.

The real struggle in "Mother Courage" is about money, food and clothing. These were the basic communist ideals, which can be reflected in the promise of Lenin "Bread, Peace and Land."Through "Mother Courage" Brecht examined the relationship between captialism and crime, his Marxist ideolody is examined through the crimes of history themselves. If the bussinessman is identified with the ganster in the "Threepenny Opera" then he is identified with the war-maker in "Mother Courage." Brecth is inferring that property is not only theft, but the murder of Ellif, the rape of Kattrin and pillage are too; war may be the extension of diplomacy but it is also the extension of free enterprise. Mother Courage and Kattrins characterisation demonstrate how religious pity, patrosim and bourgeouis respectablity are just synonmons for greed, aqusition an self-advancement. Through Mother Courage the theme of war as bussiness is highlighted, thus demonstrating that war is just 'the same as trading', and the morality ehich justifys war must be considered an evil sanction. "Mother Courage" represents the fact that the war keeps the profit going and there will always be those who take advantage of it. The characterisation of Mother Courage, whom is often perceived to be a athesis to Brechts own philosophy, demonstrates Brecths ant-captialist and anti-war philosophy.Through her characterisation Mother Courage wanted to demonstrate the unfairness of the captialst system and encourage the audience to change thie attutidutes, their fixtation of materialism, which has overshadowed and confused their basic principles and morals to life. Kattrin is the opposite to Mother Courage, although she never speaks she has suffered a great deal of personal set-backs due to the war, she is still prepared to save people. The juxtapostion of the different approaches to life that both Mother Courage and Kattrin represent, an essential woman and Mother Courage who is socially constructed one which has the power to make her own bussiness-as-usual choices. This represents their different views, one whom is pre-occupidied with materialsim and another ...read more.