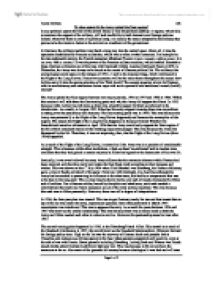 In any political system the role of the armed forces is vital for political stability. A regime, which fails to maintain the support of the military, will lack credibility in both domestic and foreign policies. Indeed, whenever there is news of a political coup, it is usually the stance adopted by the military that proves to be the decisive factor in the survival or overthrow of the government. In Germany the military tradition went back a long way into the nation's past. Above all, it was the reputation established by Prussian militarism, which was so often evoked comment. For example by the late eighteenth century, the French statesman Mirabeau 'Prussia is not a country with an army: it is an army with a country'. It was the power of the Prussian military machine, which enabled Bismark to forge German unification out of the wars with Denmark (1864), Austria (1866) and France (1870-1). Thereafter, the Army was always to be found at the centre of German political life. The military elite enjoyed great social status in the intrigue of 1932 - 3 and in the manoeuvrings, which culminated in the Night of the Long Knives. Hence two questions will be the main theme throughout this essay: how did the army fit into the power structure of the Third Reich? ...read more.

This was because there was a mutual need as both the Army and Hitler needed each other in order to survive. However this partnership stared to wear after 1937. The second turning point happened in 1938, in the Blomberg-Fritsch Affair. This started as a result of the Hossbach Conference in 1937, the record know as the Hossbach Memorandum, Hitler put forward his foreign policy aims. High on the list was the recovery of German lands and peoples lost at Versailles and Lebensraum (living space) in the East. Most generals supported such a policy, even at the risk of war with Russia. Some generals including Blomberg, Ludwig Beck and Werner von Fritsch raised doubts about Germany's ability to fight any war. This was because it did not yet have the resources to do so. Also some of the generals felt uneasy because ideological it was bad and will start a war. Therefore, some generals contacted the British, about Germany's ability to fight in any war. An example includes the Czech crisis of September 1938, which Beck (who was a General) believed might trigger a war in Britain and France. Hesitancy and divisions amongst the conspirators weakened the plan. ...read more.

As a result Hitler suffered only suffered minor injuries. Some 200 conspirators were ruthlessly tracked down, arrested and executed. Many were hung with piano wire at Plotzennee Prison in Berlin. While others were killed many others, such as General Rommel committed suicide. This highlighted how poorly opposition was organised. There were five main reasons why opposition in the army failed. These were; the disappearance of early tensions between the army and the regime, military success and support of the regime, failure of plots between 1942 and 1944, support for the regime amongst generals and ideological support for the regime. As a result, this effected the whole Army. This was because they were put under the direction of Himmler and the Waffen SS. Also the whole Army had to do the Nazi salute, as it was compulsory. This showed how the power of the Army declined quickly. To conclude the Army really upheld the Nazi regime between 1934 to 1937. This is because the Army was independent of the Third Reich. However, after the Blomberg-Fritsch Affair Hitler slowly took over the army and his political opposition in the Army. Even thought Hitler never got rid of the Army, he controlled the majority of it. Anjna Galliara 12K To what extent did the Army uphold the Nazi regime? Page 1 of 2 ...read more.