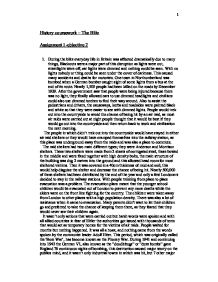 History coursework - The Blitz Assignment 1-objective 2 1. During the blitz everyday life in Britain was affected dramatically due to many things, Blackouts were a major part of this disruption as lights were out, streetlights were off, car lights were dimmed and nothing could be seen. With no lights nobody or thing could be seen under the cover of darkness. This caused many accidents and deaths for motorists. One town in Northumberland was bombed when a German bomber caught sight of some lights from a bus at the end of its route. Nearly 1,500 people had been killed on the roads by December 1939. After the government saw that people were being injured because there was no light, they finally allowed cars to use dimmed headlights and civilians could also use dimmed torches to find their way around. Also to assist the pedestrians and drivers, the causeways, kerbs and roadsides were painted black and white so that they were easier to see with dimmed lights. People would trek out into the countryside to avoid the chance of being hit by an air raid, as most air raids were carried out at night people thought that it would be best if they would go out into the countryside and then return back to work and civilisation the next morning. The people in which didn't trek out into the countryside would have stayed in either air raid shelters or they would have cramped themselves into the railway station, as this place was underground away from the raids and was also a place to commute. The raid shelters had two main different types; they were Anderson and Morrison shelters. These two shelters were made from 2 sheets of corrugated steel, these bowed in the middle and were fixed together with high density bolts, the main structure of the building was dug 2 metres into the ground and this allowed head room for most sheltered victims. ...read more.

The farms in which was built before the war was soon joined by many more upcoming farms and these farms specialised in certain aspects of food groups, for example.... Essex grew 49% of the vegetables grown in 1945. The industrial business also changed throughout these years as after the nightly air raids by the buzz bombs, the housing business had seen a "boom" in priority jobs as thousands of houses were bomb, they soon had to be erected again and this was the job of the building services. In 1946 there was a new housing policy passed in which insured that all bombed victims would have a guaranteed house to live in whilst their new one was being built and erected. This boom of housing industry was short lived and didn't hold out for long and because the Germans had caused much of the damage in the air, the British also wanted to have the same affect. The British government soon assigned Rolls Royce to start building aircrafts to cope with the demand and this helped to show how much strain the civilians were under from the air by the Germans. The boat builders had a sudden boom as well, the government wanted more boats built for the war so that they could also fight at sea like in world war 1 but this was only for a short while though as it soon fell again when the war was over and not many people wanted them anymore but only for cruising in and taking on voyages across the 7 seas. Assignment 2-objective 3 1.Sources A and B have many differences and similarities, in the titles of these two descriptions you can suddenly notice that they were both popular war time quotes as, "don't you know there is a war on" shows the fact that most people were concerned in what people wasted and used, as this clearly meant that use your resources wisely and don't waste anything and "waiting for the all clear" ...read more.

Although source L is written after the war it would still be classed as a useful piece of information, even though it is secondary and we still have to question and place doubts over the fact if it is trustworthy. 5. I "sort of" agree with this statement as at certain times people showed and reflected genuine fear and anxiety. With fear and anxiety running around in the streets it would cause certain problems, people's morale stayed high as government propaganda still helped to encourage it and maintained the amount of support in which it was getting. I think that spirits remained high because of many different aspects; these would have been many different things, such as new jobs, volunteer workers and many more reasons. Many people supported many different sayings like "Make do and mend" Sayings like these may have been formed because of the fact that nobody had the resources to buy fresh, new items. It is also understandable why so many people were scared of the blitz's progress, and with these fears in people's minds the support for the war would have decreased. With fear in people's minds there was an opposite effect, It would help to show patriotism to your country and more of these patriots aroused when the war went on. With some resources limited and food rationed and underground (black) market appeared and many different people went to these markets which would show lack of unity and would also show how people only cared for themselves and not for the welfare of the community and country. Evacuation was another form of unity as it showed how parents were scared and concerned about the next generation of English citizens, even though many children were orphaned, some adults and some parents accepted the fact that it was their duty to take these orphans on board and treat them like their own sons and daughters. History coursework-The Blitz By Liam Ineson 11p 1 ...read more.