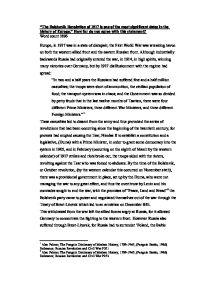 The Bolshevik Revolution of 1917 is one of the most significant dates in the history of Europe.&quot; How far do you agree with this statement?

"The Bolshevik Revolution of 1917 is one of the most significant dates in the history of Europe." How far do you agree with this statement? Word count 1896 Europe, in 1917 was in a state of disrepair; the First World War was wreaking havoc on both the western allied front and the eastern Russian front. Although industrially backwards Russia had originally entered the war, in 1914, in high spirits, winning many victories over Germany, but by 1917 disillusionment with the regime had spread: "In two and a half years the Russians had suffered five and a half million casualties; the troops were short of ammunition, the civilian population of food; the transport system was in chaos; and the Government was so divided by petty feuds that in the last twelve months of Tsarism, there were four different Prime Ministers, three different War Ministers, and three different Foreign Ministers."1 These casualties led to dissent from the army and thus provoked the series of revolutions that had been occurring since the beginning of the twentieth century, for protests had erupted causing the Tsar, Nicolas II to establish a constitution and a legislative, (Duma) with a Prime Minister, in order to grant some democracy into the system in 1905, and in February (occurring on the eighth of March by the western calendar) of 1917 strikes and riots broke out, the troops sided with the rioters, revolting against the Tsar who was forced to abdicate. ...read more.

"At Versailles the peacemakers were haunted by the 'spectre of bolshevism' spreading from Lenin's newly created Union of Soviet Socialist Republics, (USSR)."8 This mistrust in the left was provoked by Lenin's government actively persuading revolution across the world "The Russian newspaper, Pravda proclaimed on the first of November 1918, 'The World Revolution has begun...Nothing can hold up the iron tread of Revolution'".9 These attacks on the systems of the west in turn, led to countries to withhold recognition; such as Britain until 1924, the US until 1933 and Yugoslavia until 1940. These actions secluded Russia, leaving her cut off from the allied forces, "The pre-war balance of power was stricken at its roots; the revolution inaugurated twenty years of virtual isolation for Russia"10 And so throughout the inter war years Russia had to turn inward and to small states. This isolation stemmed from the revolution due to the revolution being that which brought a communist government to power, the capitalist west thereby disapproving and as such meant that as a weak nation the newly formed Soviet Union turned to Nazi Germany and negotiated the Nazi-Soviet pact on the 23rd of August 1939, in order to maintain neutrality in the face of an impending war. This action left the world stunned due to the two conflicting ideologies cooperating and thereby adds justification to the idea that the October revolution was extremely significant to European history for it added weight to the Nazi campaign towards the Second World War. ...read more.

And therefore there are other epochs that give rise to the changing nature of Europe and how it is seen today. The Bolshevik revolution has been a catalyst in the evolution and explosions of war across the continent, however, by allowing the protests and revolutions of the eighteenth and nineteenth centuries to provoke the revolt on Petrograd in the February revolutions the October revolution may not of occurred, for it was through the Dumas' failure to produce a governmental system capable of leading Russia after the fall of the Tsar that left the government open to a coup d'etat by the Bolshevik party. This fear of similar revolutions further isolated the new USSR and caused rise to extremist right-wing activity such as the Nazi party who promised to 'defend against the threat of communism' thus in turn leading to that which caused the Second World war, and from that the Cold War as the fear of a strong communist country propelled the USA into a stalemate and arms race with the nation. The Bolshevik revolution in essence was in preparation for a series of revolts and uprisings across the continent, for, "Lenin had justified the timing of the Russian October Revolution by referring to the imminence of Revolution in Europe."15 However, instead it caused the isolation of the USSR and therefore created a shadow across the eastern part of Europe, which threatened the democratic west with the slow approach of communism, and therefore the Bolshevik revolution was highly integral to the formation of Europe as it is seen today. ...read more.