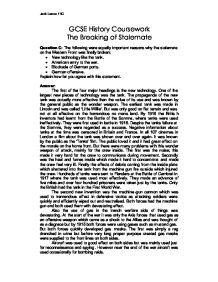 The Breaking of Stalemate on the Western Front.

GCSE History Coursework The Breaking of Stalemate Question C: The following were equally important reasons why the stalemate on the Western Front was finally broken: * New technology like the tank. * American entry to the war. * Blockade of German ports. * German offensive. Explain how far you agree with this statement. Answer: The first of the four major headings is the new technology. One of the largest new pieces of technology was the tank. The propaganda of the new tank was actually more affective than the value of its use and was known by the general public as the wonder weapon. The earliest tank was made in Lincoln and was called 'Little Willie'. But was only good on flat terrain and was not at all effective on the horrendous no mans land. By 1918 the British inventors had learnt from the Battle of the Somme, where tanks were used ineffectively. They were first used in battle in 1916. Despite the tanks failure at the Somme, they were regarded as a success. Negative information about tanks at the time was censored in Britain and France. In all 107 cinemas in London a film about the tank was shown over and over again. It was known by the public as the 'Tanks' film. The public loved it and it had great effect on the morale on the home front. But there were many problems with this wonder weapon of attack, mainly for the crew inside. The first was the noise; this made it very hard for the crew to communicate during movement. ...read more.

This was a key fortification. Even Foch made the prediction that this hill wouldn't be taken until 1919. After super human efforts were made getting all the troops and material into place the attack began on the morning of September 26th. Of the nine American Divisions that started the attack, four had no combat experience at all. Most of the experienced divisions were still at the St. Mihiel area. Even so, these untried troops took Montfaucon on the second day of the attack. They made slow progress until October 3rd, when the attack bogged down it was a combination of green troops and bad weather that slowed the attack. (It rained practically every day, turning the area into a quagmire.) Pershing sent in more experienced units from the St. Mihiel area and the attack went forward again. The Germans put up a fierce resistance and started pulling reserves from other sectors to help hold the area. This slowed the Americans somewhat, but aided the Allies in the sectors they were pulled from. In the Argonne Forest section of the battle, it was a fierce struggle for each yard. It was here that the famous "Lost Battalion" made its heroic stand. It was a mixed battalion of the 77th Division under the command of a Major Charles Whittlesey. The battalion consisted of 550 men from the 308th and 307th Infantry and the 306th Machine Gun Battalion. The battalion had been ordered to advance as rapidly as possible through the forest without regard for any other units on their flanks. On October 2nd they jumped off and proceeded through the forest hitting only sporadic and light opposition. ...read more.

Some German forces also came across several of the abandoned allied supply dumps. This deeply effected their morale as they could not believe how well supplied the allies were and many of the soldiers drunk and ate themselves into a stupor. By the end of the 16 day attack over 1200 square miles of land had been gained by the Germans but none of it had been of real strategic importance. The German troops were now exhausted and demoralised. The land they had taken was not very well fortified and the troops had taken the land too rapidly and the flow of troops had stopped. The allied counter attack was now staged and the German forces were pushed straight back again and lost more land than they had gained, not long after the Germans surrendered and the Versailles Peace Conference began. It is now possible to view all of the factors mentioned in the question in great depth and detail. All of the factors connect to make a chain of events. Firstly, Ludendorff's offensive was not very well planned as it was done in haste. This is because he knew that the attack had to be staged before the US troops arrived. The new technology helped greatly to defeat Ludendorff. The other allied successes on the Eastern Front meant that Germany lost the support of her allies. Finally the conditions in Germany due to the blockade of her ports and the loss of her allies meant that she had no choice but to surrender. Overall I believe that each factor is equally as important, as each of them rely on another in order to be successful. Jack Lenox 11C ...read more.