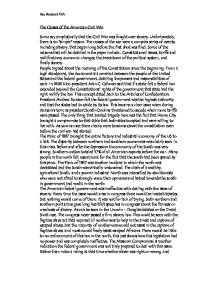 The Causes of the American Civil War.

The Causes of the American Civil War Some say simplistically that the Civil War was fought over slavery. Unfortunately, there is no "simple" reason. The causes of the war were a complex series of events, including slavery, that began long before the first shot was fired. Some of the reasons that will be detailed in the paper include.. Constitutional issues, tariffs and nullifications, economic changes, the breakdown of the political system, and finally slavery. People argued about the meaning of the Constitution since the beginning. From a legal standpoint, the document is a contract between the people of the United States and the federal government, detailing the powers and responsibilities of each. In 1828 Vice-president John C. Calhoun said that if a state felt a federal law extended beyond the Constitutional rights of the government that state had the right nullify the law. This concept dated back to the Articles of Confederation. President Andrew Jackson felt the federal government was the highest authority and that the states had to abide by its law. ...read more.

The American federal government was ineffective with dealing with the issue of slavery. Every time the issue would arise in congress there would be heated debates, but nothing would come of them. It was not for lack of trying, both northern and southern politicians gave long heartfelt speeches in congress about the fairness or cruelness of slavery. As can be seen in the Lincoln - Douglas debates or the Dread Scott case. The congress never passed a firm slavery law. This could be seen with the fugitive slave act that required all northerners to help in the arrest and capture of escaped slaves, but the majority of northerners would not assist in the capture of fugitive slaves, and most would freely assist escaped Africans. There would be little to no enforcement of this law in the north, this just shows how this legislation had no power and was completely ineffective. The Missouri Compromise is another indication the federal government was not truly prepared to deal with this issue. Rather than make a ruling at that time whether slaver was right or wrong, and whether it was something that should be allowed in the ...read more.

Also the fact that Lincoln had not won a majority of the popular vote, and had not even been put on the ballot in the south, but rather won through the electoral college made the south feel as if it was being cheated out of this election. After Lincoln's election many southern politicians followed through on their threats of secession. This was the spark that started off the civil war. Everything else before had just been dead kindling that was building up to fuel the fire that we know as the civil war. In conclusion the civil war was not merely over the issue of slavery, there was a much greater cause behind it. It was the clash of cultures that developed between the north and south. This could be clearly seen by the industrialization of the north and the old traditional agriculture of the south. There were two drastically different areas trying to fight for power in a national government that was not willing to take a strong stand on the issue of slavery. Over all the freeing of the slaves was merely a by-product of the civil war, the true causes for the war were much different. Ben Ruddock 12A ...read more.