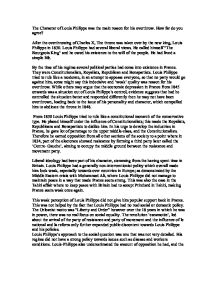 The Character of Louis Philippe was the main reason for his overthrow. How far do you agree?

The Character of Louis Philippe was the main reason for his overthrow. How far do you agree? After the overthrowing of Charles X, The throne was taken over by the new king, Louis Philippe in 1830. Louis Philippe had several liberal views. He called himself "The Bourgeois King" and he owed his existence to the will of the people. He had lived a simple life. By the time of his regime several political parties had come into existence in France. They were Constitutionalists, Royalists, Republican and Bonapartists. Louis Philippe tried to rule like a moderate, in an attempt to appease everyone, so that no party would go against him, some might say this indecisive and 'weak' quality was reason for his overthrow. ...read more.

He placed himself under the influence of Constitutionalists; this made the Royalists, Republicans and Bonapartists to dislike him. In his urge to develop the industries in France, he gave lot of patronage to the upper middle-class, and the Constitutionalists. Therefore he earned opposition from all other sections of the society to a point where in 1834, part of the electorate showed resistance by forming a third party later called the 'Centre- Gauche', aiming to occupy the middle ground between the resistance and movement party. Liberal ideology had been part of his character, stemming from the having spent time in Britain. Louis Philippe had a generally non-interventionist policy which overall made him look weak, especially towards over countries in Europe; as demonstrated by the Middle ...read more.

The Orleanist motto was "Liberty and Order" however over the 18 years in which he was in power, there was no real focus on social equality. The revolution 'escamot�e', led about the arrival of the party of resistance and party of movement and the influence of le national and la reform only further expanded public discontent towards Louis Philippe and his policies. Louis Philippe's approach to the social question was one that was not very detailed. His regime did not have a strong policy towards issues such as disease and workers conditions. Louis-Philippe also underestimated the amount of opposition he had, and the keeping of Guizot as foreign minister did not help public discontent, especially as it was thought that there was political corruption in July 1846. ...read more.