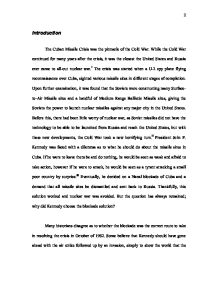 The Cuban Missile Crisis and the blockade

Introduction The Cuban Missile Crisis was the pinnacle of the Cold War. While the Cold War continued for many years after the crisis, it was the closest the United States and Russia ever came to all-out nuclear war.i The crisis was started when a U-2 spy plane flying reconnaissance over Cuba, sighted various missile sites in different stages of completion. Upon further examination, it was found that the Soviets were constructing many Surface-to-Air Missile sites and a handful of Medium Range Ballistic Missile sites, giving the Soviets the power to launch nuclear missiles against any major city in the United States. Before this, there had been little worry of nuclear war, as Soviet missiles did not have the technology to be able to be launched from Russia and reach the United States, but with these new developments, the Cold War took a new horrifying turn.ii President John F. Kennedy was faced with a dilemma as to what he should do about the missile sites in Cuba. If he were to leave them be and do nothing, he would be seen as weak and afraid to take action, however if he were to attack, he would be seen as a tyrant attacking a small poor country by surprise.iii Eventually, he decided on a Naval blockade of Cuba and a demand that all missile sites be dismantled and sent back to Russia. Thankfully, this solution worked and nuclear war was avoided. But the question has always remained; why did Kennedy choose the blockade solution? Many historians disagree as to whether the blockade was the correct route to take in resolving the crisis in October of 1962. Some believe that Kennedy should have gone ahead with the air strike followed up by an invasion, simply to show the world that the United States was not a country to be fooled with.iv Others believed a more diplomatic solution was called for; one in which no aggressive action would have been taken, thus reducing the chance of retaliation.v ...read more.

Many felt that the air strike option seemed a bit too much like the attack the Japanese made against the United States in World War II at Pearl Harbour. The fact that it would be a surprise attack, that was mostly unwarranted, gave it a cowardly sort of feel that President Kennedy did not like one bit.xxix Some even argued that the United States would eventually lose all of Latin America, as other countries would follow Cuba's example, and team up with the Russians, or another power.xxx Another strong argument for the air strike was the issue of time. Each day that passed in inactivity, more missiles became operational and the danger became more and more real to the United States and it's people.xxxi However, if an air strike were ordered, the Russians might get nervous and launch a nuclear missile early. The main reason for not choosing the air strike was the fact that there was a large risk of an outbreak of general war if the air strike went ahead. President Kennedy could not bear the responsibility of being the first to start a nuclear war. The consequences of this would be of an unimaginable horror.xxxii Another main reason that Kennedy did not like the idea of an air strike was that it would have to be followed up by an invasion. The problem with this was that Kennedy did not want to send so many men into battle, around a quarter of a million.xxxiii Another problem with the invasion was that it would mean the United States would control Cuba, and while this may sound like a good thing, at the time, it wasn't. President Kennedy simply did not know what to do with Cuba once he had control of it, he could either install a new leader and leave it, or put it under US control, neither of which he really wanted to do.xxxiv These were small decisions to make compared to Kennedy's main dilemma, whether to risk nuclear war just because the United States got scared when Russia did the same thing as them. ...read more.