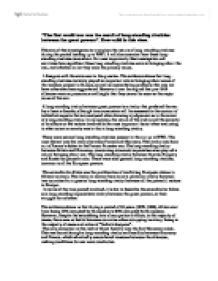 &quot;The first world war was the result of long-standing rivalries between the great powers&quot;. How valid is this view.

For example, Germany provoked the first Moroccan crisis in an attempt to test the alliance between France and Britain. The suspicions that were created motivated each country, but Germany in particular, to further arm themselves. This led to a vicious cycle of increased armament and more secretive alliances, putting in place an atmosphere (as well as the weapons) necessary for war. Weltpolitik did not help put any country's mind at rest. However, there are limitations to the extent the alliance system could have realistically brought about war. It was far from certain that Germany would back Austria-Hungary unconditionally in a Balkan war. The attitude of Italy within the triple alliance was extremely ambiguous (proven when Italy abandoned their position in the triple alliance). The triple entende was a loose arrangement, especially where Britain was involved as Britain's treaty was non binding (proven during the first Moroccan crisis when Britain did not promise support to France). The Franco-British entende contained no element of military commitment whatsoever. On top of all this, colonial disputes in Persia had soured Britain's relationship with Russia. Even though alliances had caused tensions and suspicions to run high in Europe, creating an uneasy atmosphere that at first sight appears to be perfectly favourable to war, many more errors and miscalculations were needed to lead the continent into war. In conclusion, although the alliance system did play a role in bringing about war, the system was at the same time very limited in its capabilities to do so. This suggests the structure of the system accommodated war as opposed to the view that the alliances themselves were responsible for war. Militarism in the run up to the war, that is the arms race, is often labelled as a long-term rivalry between the powers in Europe, vying for the greatest military force to satisfy their imperialistic aims and their nationalistic sentiments. ...read more.