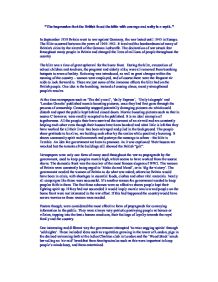 &quot;The impression that the British faced the blitz with courage and unity is a myth.&quot;

"The impression that the British faced the blitz with courage and unity is a myth." In September 1939 Britain went to war against Germany, the war lasted until 1945 in Europe. The Blitz occurred between the years of 1940-1942. It involved the bombardment of many of Britain's cities by the aircraft of the German Luftwaffe. The declaration of war struck fear throughout many people in Britain and changed the lives of millions of people throughout the country The blitz was a time of great upheaval for the home front. During the blitz, evacuation of school children and teachers, the pregnant and elderly alike, were all removed from bombing hotspots to areas of safety. Rationing was introduced, as well as great changes within the running of the country - women were employed, and of course there were the frequent air raids to look forward to. These are just some of the immense effects the blitz had on the British people. One idea is the bombing, instead of causing chaos, merely strengthened people's resolve. At the time newspapers such as 'The daily mail', 'daily Express', 'Daily telegraph' and 'London Gazette' published morale boosting pictures, once they had first gone through the process of censorship. Censorship stopped potentially damaging pictures etc which could disturb and upset the public kept behind closed doors. Morale boosting pictures such as that in source C however, were readily accepted to be published. It is an ideal example of togetherness. All the people their have survived the torment of an air raid and are constantly helping each other even though their houses have been ...read more.

The picture is very upsetting and highly likely morale across the country would have dramatically decreased and support for the war would have wavered. The government could not fight a war unless the country was behind them. Although some will argue otherwise, it is possible that the people got easily wrapped up in the news and propaganda and the whole fighting spirit that developed during the war and thus, were under the thumb of the government. In this case how do we judge peoples morale? People's ability to continue with courage and unity? The war which we see is not nessecarily what the people of the time would have experienced. With hindsight we are now able to view a whole host of information giving a broader view of the war, at the time it was very much one sided with bias information as the next paragraph proves. It produces the point of reliability regarding the sources. The British and German newspapers had two completely different views on what happened at Dunkirk in the 1940's. A German picture magazine called Signal published this: 'the great battle of annihilation. Altogether more than 1.2 million prisoners have fallen into German hands, besides limitless amounts of war material ... France and Britain's finest troops are annihilated.' An English version was published in the Daily Mirror giving an account of the same event: 'for days thousands of our brave men of the B.E.F. have been pouring through a port somewhere in England, battle-worn, but thank god, safe and cheerful in spite of weariness.' ...read more.

The barrier was broken down between the social classes and people realised that they were just the same. This caused the nation to see equality between the social classes, which was what rationing introduced to many people. In conclusion I can say that the war was not all bad, although the loss of human life I am sure most would agree far outweighs the benefits it may have brought. 43,ooo civilians were killed by 1941 with over 200 tonnes of bombs dropped every hour, but the blitz affected people in different ways. I disagree in part with the statement "The impression that the British faced the blitz with courage and unity is a myth," But only to a degree. I believe at the time people did display a courage and unity throughout the war which is supported certain sources. A and C show how people developed a humour to help them cope, B,D and G show people carried on with work daily regardless of the state of the country and the disruption which surrounded them, and again source C also shows courage in the people and a strength of mind. On the other hand I don't see that this is how people felt. Outwardly they displayed a sheer determination to continue but inwardly I feel it was a very different matter. Overall, I don't believe it is possibly to clearly distinguish whether the statement is true of false. It depends from person to person and individuals story and without leafing through other sources such as diary entries or personal writings etc I don't believe it possible to agree nor disagree with all aspects the statement covers. ...read more.