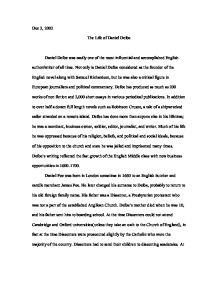 The Life of Daniel Defoe.

Dec 3, 2002 The Life of Daniel Defoe Daniel Defoe was easily one of the most influential and accomplished English author/writer of all time. Not only is Daniel Defoe considered as the founder of the English novel along with Samuel Richardson, but he was also a critical figure in European journalism and political commentary. Defoe has produced as much as 200 works of non fiction and 2,000 short essays in various periodical publications. In addition to over half a dozen full length novels such as Robinson Crusoe, a tale of a shipwrecked sailor stranded on a remote island. Defoe has done more than anyone else in his lifetime; he was a merchant, business owner, soldier, editor, journalist, and writer. Much of his life he was oppressed because of his religion, beliefs, and political and social ideals, because of his opposition to the church and state he was jailed and imprisoned many times. Defoe's writing reflected the fast growth of the English Middle class with new business opportunities in 1600-1700. Daniel Foe was born in London sometime in 1660 to an English butcher and candle merchant James Foe. He later changed his surname to Defoe, probably to return to his old foreign family name. His father was a Dissenter, a Presbyterian protestant who was not a part of the established Anglican Church. ...read more.

For 3 years Defoe traveled Europe as a merchant and tourist while writing material against James II. Daniel Defoe became a big supporter of King William of Orange joining his army in 1688, he rose high in rank and between 1695 to 1699 was appointed by King William to an accountant to the commissioners of the Glass duty. He was also a secret advisor and leading pamphleteer for King William. In 1701 Defoe wrote the satirical The True-Born Englishman, which became the best selling poem of that time. At the time that the poem was written, the English have not come to accept William of Orange as he was a foreigner from Holland. Defoe made the point in The True-Born Englishman that since all English have non-English roots in them it would be reasonable to accept William as king. "Wherever God erects a house of prayer, The Devil always builds a chapel there; And 'twill be found, upon examination, The latter has the largest congregation.", from The True-Born Englishman. Defoe followed up with The Shortest Way with Dissenters in 1702, with a sarcastic tone he made fun of the Established Church by pretending to be on their side, and then accuse all other religions of ridiculous things. For this he was pilloried and sent to prison. ...read more.

Robinson had to rebuild his world out of raw materials in an unfamiliar domain. The novel illustrated how important the need for society is, and how solitude can break down a person. After the success of Robinson Crusoe, Defoe followed up with more novels; Moll Flanders, A Journal of the Plaque Year, Colonel Jack, and Roxana. Moll Flanders is similar in some ways with Robinson Crusoe, only Moll Flanders has a female protagonist. Both novels deal with a real person stuck in a difficult situation with only their own wit to survive the harsh conditions. By 1920s Defoe stopped producing any kind of political pamphlets or literature, perhaps he became tired of creating enemies and rivals. He however kept on writing novels and in 1724-27 published 3 volume historical guide book; A Tour Thro the Whole Island of Great Britain. This set provided detailed first hard account of the state of the country. Along with it's economic and social state. Daniel Defoe died on the 26th or 24th of April 1731, in Ropemakers Alley in Moorfields, now part of the London Borough of Hackney. He died poor. Daniel Defoe was one of the greatest writers ever because he observed how social and economic surroundings effected human nature. His novels are important in history because they mark an important break from traditional long poems and dramas. Defoe created reality of what we are reading by presenting realistic details and conditions. Defoe's complex lifestyle contributed to his understanding of people and the world. ...read more.