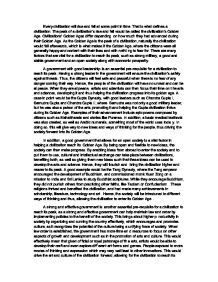 Hence, they will flourish and bring the civilization higher and nearer to its peak. A good example would be the Tang Dynasty, where the Tang emperor encouraged the development of Buddhism, and commissioned monk Xuan Zong on a mission to India and Sri Lanka to study Buddhist scriptures. While they encourage Buddhism, they did not punish others from practicing other faiths, like Taoism or Confucianism. These religions thrived and benefited the civilization, and had made many achievements in scholarship, literature, technology and art. Hence, the society will be introduced to different ways of thinking and thus, allowing the civilization to enter its Golden Age. A strong and effective government is another essential pre-requisite for a civilization to reach its peak, as a strong and effective government can help maintain law and order by implementing policies to the benefit of the society. This brings about higher productivity in society by organizing and running the country effectively, which encourages and promotes culture, as it recognizes the potential of the culture being a unifying force of society. ...read more.

A case study would be the Tang Dynasty, where emperor Taizhong re-conquered land that was broken away as well as conquered land in the north and the west, while his military power grew stronger and stronger, giving the citizens nothing to worry about. By doing this, the society can continue to grow in military strength and reach its Golden Age. In conclusion, there are many factors that contribute to the reaching of a civilization's Golden Age, having a good and uncorrupted government will allow it to make good and well-though out decisions, and ensure the strength of its military. Also, by having a strong government, that means the it can be humble and be open to new ideas to the civilization and allow the citizens to be introduced to new forms of art, etc. thus, this will make sure of the civilization's economic prosperity. With a good government, its leader can then be well educated and skilled in leading, making sure that the civilization continues to thrive. Hence, a strong and effective government is the most important pre-requisite for a civilization to reach its Golden Age. ...read more.