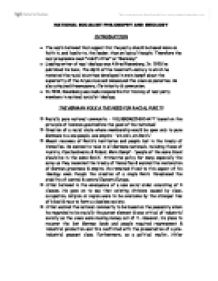 The nazi's believed that support for the party should be based more on faith in, and loyalty to, the leader, than on logical thought - Therefore the nazi programme read &quot;Adolf Hitler&quot; or &quot;Germany&quot;.

INTRODUCTION * The nazi's believed that support for the party should be based more on faith in, and loyalty to, the leader, than on logical thought. Therefore the nazi programme read "Adolf Hitler" or "Germany" * Leading writer of nazi ideology was Alfred Rosenberg. In 1925 he published his book, The Myth of the twentieth century in which he restated the racial doctrines developed in mein kampf about the superiority of the Aryan race and denounced the Jews as parasites. He also attacked freemasonry, Christianity & communism. * In 1934, Rosenberg was made responsible for training all nazi party members in national socialist ideology. THE GERMAN VOLK & THE NEED FOR RACIAL PURITY * Racially pure national community - VOLKGEMEINSCHAFT based on the principle of 'common good before the good of the individual'. * Creation of a racial state where membership would be open only to pure Germans in a one people, one empire - 'ein volk, ein Reich.' * Meant recovery of Reich's territories and people lost in the treaty of Versailles. He wanted to take in all Germans nationals, including those of Austria, Czechoslovakia & Poland. Mein Kampf - 'people of the same blood should be in the same Reich.' Attractive policy for many especially the army as they resented the treaty of Versailles & wanted the restoration of German greatness & empire. ...read more.

And because of this he never spoke of it in his speeches & despite this apparent inconsistency, there was always a general aim to get rid of the Jews. * Policies were largely dictated by circumstances and evolved from depriving the Jews of their civil liberties & economic livelihood to increased persecution and violence, symbolized by the organized destruction and massacre of 1938, and reached a climax in their forced removal to the death camps of the east from 1942 onwards. CONQUEST OF "LIVING SPACE" (LEBENSRAUM) & HOSTILITY TO RUSSIA * Increasing population resulted in pressure on land & resources, which meant that Germany was a people without space. * In Mein Kampf Hitler declared that: "The external security of a people in largely determined by the size of its territory." If he won power Hitler promised to occupy Russian land that would provide protection and lebensraum (living space) for the German people. This action would help to destroy the Jewish/Marxist attempt to control the world: "The Russian Empire in the East is ripe for collapse; and the end of the Jewish domination of Russia will also be the end of Russia as a state." This policy ran the risk of war but it was welcomed by Hitler. ...read more.

A PHILOSOPHY OF LIFE * Weltanschauung ("world view" or "Outlook-on-the World") - word used to describe national socialist's philosophy of life. Racial struggle, fanatical anti Semitism & a belief that Germany's future could be secured only through the conquest of lebensraum at the expense of Russia. * Marxism was regarded as a rival of weltanschauung because: ? Marxism represented mass democracy & equality, which opposed Hitler's beliefs of an authoritarian state & the aristocratic rule of the elite. ? Marxism's belief in equality between peoples challenged Nazi racial inequality & the domination of the strong. ? Its class solidarity opposed Hitler's call for national unity founded in the Volk. ? Its internationalism opposed his nationalism. * The writings of Treitschke influenced Hitler's obsession with violence, struggle & war. Hitler interpreted social Darwinism to mean that nature is governed by selection, victory goes to the strong & the weak must be eliminated. * Along with the concept of struggle, he believed that the purity of blood and the creativity of each individual were the three principles that controlled the vitality of every nation. * Hitler was aware of the mixed response he got from people, but he relied on propaganda to get the people to accept his Weltanschauung. In this he was not completely successful, but he did not abandon his central beliefs. NATIONAL SOCIALIST PHILOSOPHY AND IDEOLOGY ...read more.