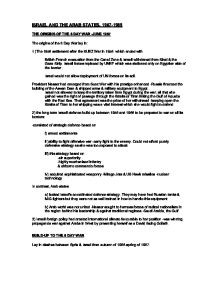 ISRAEL AND THE ARAB STATES, 1967-1989 THE ORIGINS OF THE 6 DAY WAR -JUNE 1967 The origins of the 6 Day War lay in: 1 )The 1956 settlement after the SUEZ War in 1956 which ended with British-French evacuation from the Canal Zone & Israeli withdrawal from Sinai & the Gaza Strip. Israeli forces replaced by UNEF which was stationed only on Egyptian side of the border . Israel would not allow deployment of UN forces on its soil. President Nasser had emerged from Suez War with his prestige enhanced -Russia financed the building of the Aswan Dam & shipped arms & military equipment to Egypt. Israel not allowed to keep the territory taken from Egypt during the war; all that she gained was the right of passage through the Straits of Tiran linking the Gulf of Aquaba with the Red Sea. That agreement was the price of her withdrawal -keeping open the Straits of Tiran to her shipping was a vital interest which she would fight to defend 2) the long-term Israeli defence build-up between 1956 and 1966 to be prepared to war on all its borders: -consisted of strategic defence based on i) ...read more.

USSR assumed responsibility for Egyptian air defence -20,000 military advisers sent to Egypt but Russians continued to support cease-fire at Canal Zone & to urge restrain upon the Egyptians 2 (a)US took over role of major arms supplier to Israel after de Gaulle stopped French arms deliveries in wake of 1967 war. Washington took position: -that Israel's security requirements would have be comprehensively addressed -she would have to receive a quid pro quo if she were to withdraw from the occupied territories conquered in 1967. -Supported UN Resolution 242 passed in November 1967 -was to provide basis for future agreement. (b) lsrael and Jordan were important regional partners for the United States. -civil war broke out in September 1970 between King & PLO -threatened to destabilise Jordan where Palestinians comprised half the population. -Syrian army moved into Jordan i) Substantial American arms shipments to Jordanian ruler to help him hang on to power . ii) Sought to contain crisis within Jordan, prevent further intervention of outside powers which might draw in Superpowers & cause the crisis to escalate. RUN-UP TO YOM KIPPUR WAR 1) During 1967-1970 Egypt & Israel fought a "war of attrition" across the Suez Canal and the Sinai border . ...read more.

sought to overcome these difficulties by inviting President Sadat of Egypt & Prime Minister Begin of Israel to Camp David in September 1978. -After 3 days of negotiating they produced outline of an EGYPTIAN-ISRAELI PEACE ACCORD which was signed in March 1979 TERMS: 1) Both states agreed to end state of war between them & establish full diplomatic relations 2) The Sinai was to be returned to Egypt & Israeli settlements to be removed 3) In return Israeli ships were promised free use of Suez Canal & Straits of Tiran 4) Egyptians accepted vague commitment from Israel to grant autonomy to West Bank & Gaza but Israel to retain overall control CONSEQUENCES OF SETTLEMENT- THE COLD PEACE -EGYPT was denounced by other Arabs for betraying Arab cause- they cut off diplomatic & economic ties with Cairo -Opposition within Egypt itself led to assassination of Sadat in 1981 -Israel would not agree to self-determination for West Bank & Gaza -continued to establish settlements there -no movement in this direction for over a decade until diplomatic movement began as a result of : -massive protests by Palestinians which began in West Bank & Gaza in 1987(the INTIFADA) & -recognition of Israel's right to exist by PLO in 1988 ...read more.