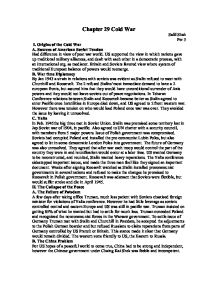 Origins of the Cold War.

Chapter 29 Cold War Salil Shah Per 3 I. Origins of the Cold War A. Sources of American Soviet Tension Had difference in view of post war world. US supported the view in which nations gave up traditional military alliances, and dealt with each other in a democratic process, with an international org. as mediator. Britain and Soviets favored view where system of traditional European balance of powers would reemerge. B. War time Diplomacy By Jan 1943 a strain in relations with soviets was evident as Stalin refused to meet with Churchill and Roosevelt. The 2 refused Stalins'most immediate demand to have a 2 european fronts, but assured him that they would have unconditional surrender of Axis powers and they would not leave soviets out of peace negotiations. In Teharan Conference relations between Stalin and Roosevelt became better as Stalin agreed to enter Pacific once hotstilities in Europe died down, and US agreed to 2 front western war. However there was tension on who would lead Poland once war was over. They avoided the issue by leaving it unresolved. C. Yalta In Feb. 1945the big three met in Soviet Union. Stalin was promised some territory lost in j*p Soviet war of 1904, in pacific. Also agreed to UN charter with a security council, with members from 5 major powers. Issue of Polish government was compromised. Soviets had occupied Poland and installed the pro communist Lubin Poles, but also agreed to let in some democratic London Poles into government. ...read more.

The GI bill of rights, or Servicemen's Readjustment Act provided houseing, education and job training to vets and increased their spending. Serious inflation cause prices to rise 15 % annually, compounding this was labor unrest as major strikes were occurring in most industries. In 1946 John Lewis led the United Coal Workers out on strike for 40 days. Truman demanded coal mine owners to agree to union demands, simulataneously the nation's railroads shut down, however Truman threatened military intervention and the strike was over in a few days. Reconversion was difficult for women and minorities who entered during wartime. Now men where returning from war and wanted their old industrial jobs back, many women voluntarily gave them back but as much as 80% and all minority men wanted to keep jobs. Women would look to other areas of the economy, mainly the service sector. B. The Fair Deal Rejected The Fair deal was a 21 point domestic program calling for expansion of social security benefits, legal minimum wage increase from 40 to 65 cents... public works... and other programs. In all he wanted to declare an end to wartime moratorium on liberal reform. However the Republicans would regain control of house and senate and reduce government spending and many other reforms. The Taft Hawley Act would empower president to call a 10 day cooling period before a strike. Truman would veto it but congress overruled. ...read more.

McCarthy then moved to other agencies and was made chairman of special subcommittee on subversion in the government. He never proved conclusive evidence that anyone he accused was really a communist. Republican rallied that democrats had been responsible for 200 years of treason. Few spoke out against him, even Eisenhower who dislike him did not while running for presidency. D. Republican Revival Frustration in Korea, and a bad year in Democratic party caused Truman to drop out of Presidency race. Gov. Adali Stevenson would be nominated instead. Republican nominated Eisenhower, and as his running mate chosen Nixon. Nixon would attack the democrats for being cowardly in their attack against communism. Eisenhower and Nixon would win overwhelmingly, and republican would regain control of both houses. The election ended 20 years of democratic domination, and ended worst turbulence of post war era. VI. Conclusion Even during world war II US and Soviets had different views of what world should be like once war was over. Right after the war this difference in opinion became evident. US thought Stalin was like Hitler in their quest for world domination, Stalin thought US wastrying to protect their world dominance by not allowing Russia to be a world power. The result was high tensions and the Cold War. US would help revitalize the broken Europe by gioving economic aid through Marshall plan and protecting them from communism. At home hysteria of the infiltration of communists into American government was fueled by reports and publicized court cases. ...read more.