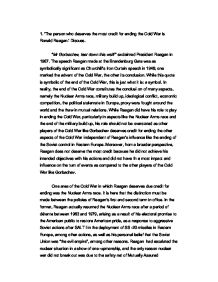 The person who deserves the most credit for ending the Cold War is Ronald Reagan. Discuss

1. 'The person who deserves the most credit for ending the Cold War is Ronald Reagan.' Discuss. "Mr Gorbachev, tear down this wall!" exclaimed President Reagan in 1987. The speech Reagan made at the Brandenburg Gate was as symbolically significant as Churchill's Iron Curtain speech in 1946; one marked the advent of the Cold War, the other its conclusion. While this quote is symbolic of the end of the Cold War, this is just what it is: a symbol. In reality, the end of the Cold War constitutes the conclusion of many aspects, namely the Nuclear Arms race, military build up, ideological conflict, economic competition, the political stalemate in Europe, proxy wars fought around the world and the thaw in mutual relations. While Reagan did have his role to play in ending the Cold War, particularly in aspects like the Nuclear Arms race and the end of the military build up, his role should not be overstated as other players of the Cold War like Gorbachev deserves credit for ending the other aspects of the Cold War independent of Reagan's influence like the ending of the Soviet control in Eastern Europe. Moreover, from a broader perspective, Reagan does not deserve the most credit because he did not achieve his intended objectives with his actions and did not have the most impact and influence on the turn of events as compared to the other players of the Cold War like Gorbachev. ...read more.

problems partly caused by the maintenance of such a large military force that forced them to end this aspect of the Cold War. Military spending had consumed 25% of Moscow's GDP, and besides increasing the production of heavy-industries, neglecting consumer-based industries, these large forces also served to strengthened the conservatives' and hardliners' hold on influence and power, which Gorbachev wanted to remove. The strain on the American economy caused by Reagan's military build up was beginning to tell, and faced with opposition in congress about the huge toll of the Cold War, Reagan had decided in his 2nd term to cut back on military spending. This culminated in the signing of the CFE treaty in 1990, which reduced the conventional forces of NATO and the Warsaw Pact. Thus, the end of the military build up-aspect of the Cold War was caused very much by internal economic and political problems rather than any one party gaining the upper hand in this competition. In fact, it might be argued that Reagan prolonged this aspect of the Cold War through his military build up in his first term, forcing the Soviet Union not to reduce military spending and focus on their already-existing internal problems. Nevertheless, both Reagan and Gorbachev deserve equal credit for cutting back on military spending to focus on their respective problems. With regards to the end of the political stalemate in Europe, Reagan deserves very little credit, if any. ...read more.

It is at this juncture that the role of personalities in the ending of the Cold War must be examined as an underlying factor, and yet again, both Reagan and Gorbachev deserve equal credit. Then-Vice President George Bush described Gorbachev as having "a disarming smile, warm eyes, and an engaging way of making an unpleasant point and then bouncing back to establish real communication with his interlocutors. However, the most important point was that as then-Secretary of State George Shultz remarked, Gorbachev was "totally different from any Soviet leader I've ever met." Reagan also had an equally important role to play, and had long insisted that he could get through to a Soviet leader if he could ever meet one face-to-face, because up to then, "They keep dying on me." Both men's relationship was the best yet between any two leaders of the Soviet Union and the USA. While this is not to say they did not have their disagreements, like in Reykjavik in 1986 over SDI technology, their inner desire for an end to the Cold War pressed them on in negotiations. Their relatively harmonious working relationship set the foundation upon which negotiations for the end of the Cold War would be held. As in any relationship, it takes two to tango, and as such credit ought to be equally shared. All in all, both Reagan and Gorbachev deserve credit for ending the Cold War, and in some aspects Reagan deserve more credit, which in others Gorbachev. ...read more.