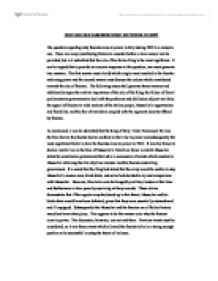 The question regarding why fascists came to power in Italy during 1922 is a complex one. There are many contributing

WHY DID THE FASCISTS COME TO POWER IN 1922? The question regarding why fascists came to power in Italy during 1922 is a complex one. There are many contributing factors to consider before a clear answer can be provided, but is it submitted that the role of the Italian King is the most significant. It can be argued that to provide an accurate response to this question, one must generate two answers. The first answer must clarify which single event resulted in the fascists achieving power and the second answer must discuss the actions which contributed towards the rise of fascism. The following essay shall generate these answers and additionally argue the relative importance of the role of the King, the failure of liberal parliamentary government to deal with the problems and disillusion of post-war Italy, the appeal of fascism to wide sections of the Italian people, Mussolini's opportunism and flexibility, and the fear of revolution coupled with the apparent security offered by fascism. As mentioned, it can be submitted that the King of Italy, Victor Emmanuel III, was the final barrier the fascists had to confront in their rise to power and subsequently the most significant factor in how the fascists came to power in 1922. It was his failure to declare martial law in the face of Mussolini's March on Rome in which Mussolini stated he would seize government that led to a succession of events which resulted in Mussolini achieving the title of prime minister and the fascists controlling government. ...read more.

These events suited Mussolini's efforts in different ways. Firstly, the people of Italy already craved for strong leadership, of which Mussolini promised. Secondly, many disgruntled ex-soldiers, who now faced unemployment as the war had ended, would prove invaluable fighters for fascism. When a country is experiencing difficulties and the figure(s) in charge offer nothing but head scratching, its people search for alternatives. If the government had been more decisive then it can be argued that the people would not have sought after a strong leader such as Mussolini, but with the peoples support Mussolini was place in an excellent position. The threat of a socialist revolution was a brief one spanning from 1918 to 1920 but during this time one can argue that many of the support structures were set in place for the growth of fascism. During these years there was an upsurge of strikes, street demonstrations, riots and occupations of factories. The increased support for fascism's popularity came about when it seemed that the liberal government failed to act. The fascist black shirts resorted to violence to end these riots and were seen as saviours of the nation and as a result of which, considerably boosted their position within Italy's political spectrum. Following on from the increase of support following the crushing of the perceived socialist threat, a discussion must be made on the appeal of fascism to wide sections of the Italian people. ...read more.

The lack of clear procedures or protocols allowed Mussolini to make his biggest change, which was to move his fascist party from left wing government to right wing. All these events suggest that whichever event occurred, Mussolini used it and altered his party's procedures and protocols to maximise fascism's popularity. The point raised here is that the decisions and actions of the Italian King were vital in allowing the fascists to achieve power during 1922. Regardless of any other factor if the King had declared martial war it is believed that the fascist movement would have been defeated. When one is answering such a question it is of course relative to acquire as many facts as possibly regardless of how insignificant they at first appear. Therefore it must be stated that one must define the difference between why the fascists came to power and the events which took place which allowed the fascists to be in a position to use the threat of violence and succeed. In this case to respond to why, one must give the reason of the King. Whereas, to answer how the fascist were able to get into a strong position one must give the reasons of the failure of liberal parliamentary government to deal with the problems and disillusion of post-war Italy, the appeal of fascism to wide sections of the Italian people, Mussolini's opportunism and flexibility and the fear of revolution - the apparent security offered by fascism. ...read more.