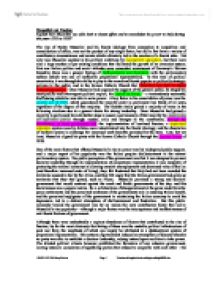 Explain how Mussolini was able both to obtain office and to consolidate his power in Italy during the years 1922 to 1929?

Mussolini and Fascism Explain how Mussolini was able both to obtain office and to consolidate his power in Italy during the years 1922 to 1929? The rise of Benito Mussolini and his fascist ideology from conception to acquisition and consolidation of office, was not the product of any single factor, but did in fact have a variety of contributory circumstances and events which ultimately led to the creation of a fascist state. Not only was Mussolini assisted in his political ambitions by incompetent opposition, but there were also a large number of pre-existing conditions that facilitated the growth of an extremist system. Post-war Italian politics and social attitudes were somewhat reminiscent of Germany's Weimar Republic; there was a general feeling of disillusionment and frustration with the parliamentary system (which was one of ineffective proportional representation). In this time of political uncertainty, it was through his ability to play to the crowd and fa�ade popular or politically strategic policies to the public, and to the Roman Catholic Church that Mussolini was able to attract widespread support. Once Mussolini had acquired the support of the general public, he staged his most prolific and extravagant political exploit, his 'march on Rome' - a tremendously successful bluff during which he was able to seize power. A key factor in his consolidation of power was the Acerbo Act of 1923, which guaranteed the majority party in parliament two thirds of all seats, regardless of the degree of that majority. The fascists easily gained a majority of votes in the following elections due to a general desire for strong leadership. ...read more.

For this bold, audacious feat Mussolini was rewarded greatly - far from a battle between the fascists and the regular army and police in which the black-shirts would have surely been dispersed, Mussolini was invited to Rome by King Victor Emmanuel III, to form a new government. Mussolini had seized power, but contrary to popular rumour it had been obtained legally with merely the threat of violence persuading the king's appeasement. Much historical debate has taken place over the kings motives for allowing this fascist takeover, as the uprising could have easily been defeated by the army or police, but despite this, Victor Emmanuel refused to declare a state of emergency to quell the insurrection. It has been suggested that a number of influences led to his decision to allow a fascist government, first and foremost was a lack of confidence in Prime Minister Luigi Facta. Aside from this lack of confidence, Emmanuel was also concerned at the possibility of insubordination from fascist sympathisers within the army, and in this same vein of concern he was also worried about the possibility of an abdication forced by his generals in favour of his cousin, the Duke of Aosta, to be king. Emmanuel may also have had concerns about the possibility of a long and drawn out civil war in the event of a failed attempt to trounce fascism. Alternately, it is entirely possible that following Mussolini's abandonment of the republican component of his programme, that the king was genuinely partial to Mussolini. Regardless of his reasoning, the effect of his not declaring a state of emergency was to empower Mussolini, and place him in office. ...read more.

Mussolini exploited several key aspects of the social and political climate in Italy during the twenties, and his wiliness and public appeal ultimately led to the establishment of the fascist state. His rise was facilitated by the ineffectiveness of his opposition in collaborating in a united effort to quell fascism, and it was this ineptitude and impotence - bred of the inherent flaws of proportional representation in any unstable state - that led the Italian people to disillusionment and frustration at the current parliamentary system, and thereby to the support of Mussolini, who's party promised a strong decisive government. Furthermore Mussolini was able to masquerade as a defender against communism in his opposition to the socialist led strikes of 1922, and subsequently seized power in his prolific march on Rome. There were a number of events that constituted the consolidation of Mussolini's power, but the fundamental root of his power was to be found in the initial implementation of the Acerbo Act in 1923 which enabled him to carry his motions to amend the constitution. Following this, he utilised much propaganda and censorship in order to indoctrinate the people of Italy (particularly the youths) into the fascist ideology. He then placed restrictions on the function of the economy by implementing his Corporate State by which he hoped to control the Italian economy, and forged amicable relations between the fascist state and the Papacy - a powerful ally. As such, he was able to obtain office and consolidate his position of power in a relatively short period of time; by 1930 this process was almost complete. Christopher Bolton 1/05/07 5:37 PM Carey Student Page 1 D:\My Documents\History\Mussolini and Fascism Final.doc ...read more.