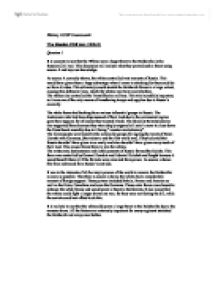 History GCSE Coursework The Russian Civil war, 1918-21 Question 1 It is accurate to say that the Whites were a huge threat to the Bolsheviks in the Russian Civil war. This discussion will analyse why they proved such a threat using source A and my own knowledge. As source A correctly shows, the whites controlled vast amounts of Russia. This would have given them a huge advantage when it came to attacking for they could do so from all sides. This ultimately would stretch the Bolshevik forces to a large extent, causing thin defensive lines, which the whites may have easily broken. The whites also controlled the Trans Siberian railway. This was incredibly important, as it was one of the only means of transferring troops and supplies due to Russia's enormity. The white forces had backing from various influential groups in Russia. The landowners who had been dispossessed of their land due to the communist regime gave their support, for of course they wanted it back. The Socialist Revolutionaries also supported them because they were deeply angered at Lenin's move to close down the Constituent assembly due to it being " counter revolutionary". The Communists were hated by the nationalist groups for signing the treaty of Brest-Litovsk with Germany, (the treaty to end the first world war). ...read more.

Therefore this statement is reliable. I believe this source is reliable in most that it says. It is not a distorted view at all and is actually surprisingly trustworthy. I would have expected it to be even more biased against the reds, as the writer was a white whom's duty it was to spread anti red propaganda given the opportunity. The Bolshevik sucsess in the civil war was due to the weaknessess of the whites . In this essay I will assess and discuss this interpretation, looking at the all the factors and evidence. The White armies were not united as a fighting force. Source A correctly shows many different nations advancing from different sides. These nations all had different objectives and ambitions and were not fighting for one single cause. Therefore instead of fighting as one large unit they fought as several, effectively weakening themselves. There were even cases of generals on the White side refusing to speak to each other, An example of this were the Generals Kornilov and Alexi. Many troops fighting on the White side were incredibly exhausted by world war one. These troops were sent to Russia and may have fought with physically tired bodies and equipment. The reds were extremely ruthless to the white officers as source B suggests. ...read more.

Trotsky conscripted thousands of normal Russians and forced them to fight against the whites. The red army was fresh and new unlike the beligered tired armies of the whites who had been fighting world war two. This gave them a strong advantage and of course boostered there morale, which was extremely high. The Soviets were also very lucky in the fact that they controlled the two main industrial centres, Moscow and Petrograd. This point is backed up in source F which mentions that the reds controlled most of the resources of old Russia. This source is unlikely to be biased for it is written by an indepedant British historian who would probably have little reason to distort the truth. They also had control of the important railway network which gave them the ability of moving troops quickly and effectively. Perhaps the most important factor for the Soviet victory is that they had clear objectives on what they wanted to achieve. A victory for them would secure power over Russia and all soldiers were completely united in a common cause. This is bound to increase their morale and determination. It is fair to say that the whites did have alot of weaknessess during the civil war, but this is not solely why the Bolsheviks won. The Bolshevik victory was largely down to their own strengths and sheer determination as well as great leadership and order. ...read more.